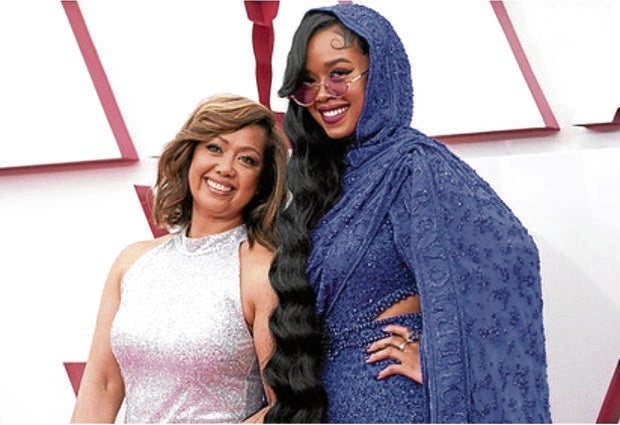 For the acclaimed R&B artist H.E.R., being on the Oscars stage with a trophy in her hands sends a message to young Black and Filipino people that they “can be up there, too.”

“Me just being up there is a message… What you say matters. What you sing matters. What you play, what you write… it matters because it’s a reflection of who we are. And I’m just happy to represent,” said the Filipino-American singer who took home the best original song award for her song “Fight for You,” from the movie “Judas and the Black Messiah.”

“I can’t believe I’m here, you know? And so I just hope there’s another little girl out there or whoever going, ‘I can do that too. I can be that, one day,’” she said in a press conference at the 93rd Academy Awards—a video of which was uploaded by Variety to YouTube.

She dedicated her win to her teary-eyed Filipino mother who was with her at the ceremony, and thanked her African-American father at home, for introducing her to artists Sly and the Family Stone, Curtis Mayfield and Marvin Gaye. “They paid off!” said the singer, whose real name is Gabriel Sarmiento Wilson.

H.E.R. also shared the trophy with her cowriter Tiara Thomas and coproducer D’Mile. “What we write is a reflection of what we feel. And that’s why I love collaborating with them. This win means so much to me and for all of us,” she said.

This win was unexpected, H.E.R. said. And she couldn’t be more thankful—not only about winning, but being part of a film that tells “an important story.”

“Judas and the Black Messiah” is a biographical drama that tells of FBI informant William O’Neal (Lakeith Stanfield), who, in exchange of a plea deal, betrays and gathers intelligence on Fred Hampton (Daniel Kaluuya), the chair of the Illinois chapter of the Black Power group Black Panther Party.

“I can’t think of a better timing to win something like this. I’m just happy to be here at the Oscars and to be part of this movie. It’s educating people. I feel more connected to my roots, I know more about the Black Panther. The education and the sense of history that it gave me—nothing compares to that,” she said.

Wearing a hooded dress inspired by the late music legend Prince, the 23-year-old musician also highlighted the responsibility of musicians and filmmakers as truth-tellers.

“We have the opportunity and responsibility to tell the truth, and write history that way it was and how it connects us to what we see in the world today,” she said. “It’s like saying, ‘As long as I’m standing, I’m going to fight for you,’” she stressed. 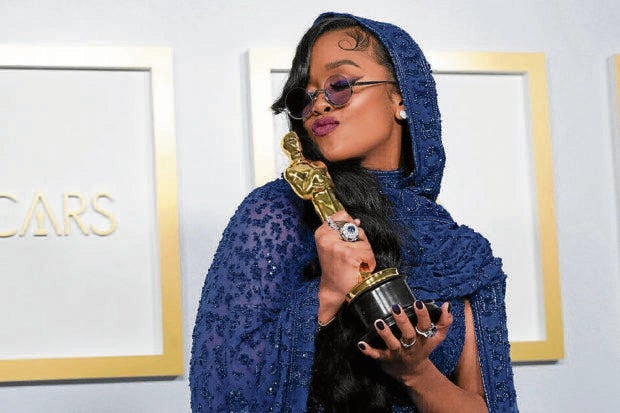 “And I have been given a platform and the Oscars stage to tell a message and really speak my own truth, and continue to spread the word of our history and of what’s happening today… and the pain,” she added.

H.E.R. now has four Grammys and an Oscar—she’s halfway to the EGOT (Emmys, Grammys, Oscars, Tonys). Are television and theater work in the offing? “There’s absolutely going to be an EGOT in my future… hopefully!” she jested. “But yeah, I’m also super passionate about acting, so you may see me as an actress also. And I love musicals.”

Meanwhile, H.E.R., who’s behind the hits “Best Part” (with Daniel Caesar), “Slide,” “Focus” and “Damage,” has just released a new single titled “Come Through.” Cowritten with fellow Grammy-winning star Chris Brown, the smoldering R&B song will be part of H.E.R’s upcoming album under RCA Records, “Back of My Mind.” INQ