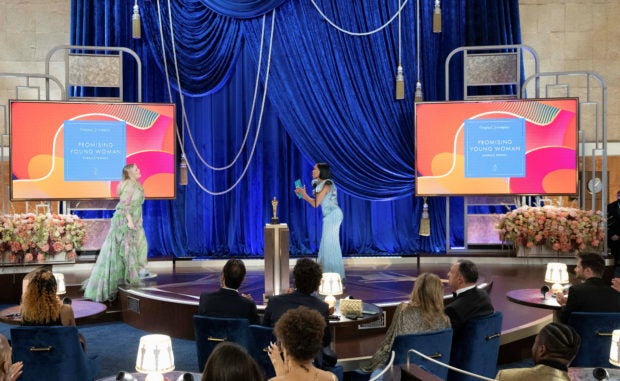 LOS ANGELES — The Oscars telecast on Sunday, stripped to its bare essentials by constraints of the COVID-19 pandemic, aired with a look and feel like no other, devoid of the usual comedy and musical performances but chock full of lengthy oratory from the winners.

As promised in advance by producers, the 93rd annual Academy Awards ceremony immediately stood out as a sharp departure from televised Oscar presentations of the past, with no opening monologue or any of the glitzy song-and-dance numbers that typically fill the show.

Performances of the five Oscar-nominated best original songs were relegated to pre-recorded presentations broadcast during a two-hour pre-show ahead of the main event on the Disney-owned ABC network.

The very setting for Hollywood’s highest honors was unlike any before it, a ballroom decorated in a quasi-cabaret style inside Union Station, the ornate but decidedly less conventional venue of a railway pavilion in downtown Los Angeles.

Coronavirus-related travel restrictions and public health measures forced a complete overhaul of the show, limiting attendance to just a few hundred nominees and presenters, with some contenders joining the festivities by satellite from international locations.

The show itself opened with a camera following actress Regina King, dressed in a shimmering blue, sequined evening gown, as she strode through the grand hall of the rail station and onto the stage, surrounded by stars and their guests seated at socially distanced tables and booths arrayed around the room.

King, the 2005 best supporting actress winner whose feature directorial debut “One Night in Miami” was nominated for three awards this year, noted that the celebrities in attendance would be seen without face coverings while on camera.

But she said the stars were, nevertheless, following strict COVID-19 safety guidelines that have allowed Hollywood to resume productions in recent months.

“Tonight we are following all the rigorous protocols that got us back safely,” she said. “Just like on a movie set, when we are rolling, masks off. And when we’re not rolling, masks on.”

Events surrounding the Minneapolis trial of the former policeman convicted of murdering George Floyd, and renewed calls for sustaining the struggle against racial injustice in America, weighed heavily on the Oscars as well.

“If things had gone differently this past week in Minneapolis, I might have traded in my heels for marching boots,” King said in an early moment that sought to strike an awkward balance between celebration and social consciousness.

“I know that a lot of you people at home want to reach for your remotes when you feel like Hollywood is preaching to you,” King said. “But as the mother of a Black son, I know the fear that so many live with, and no amount of fame or fortune changes that.”

One of the greatest changes from traditional Oscar presentations during Sunday’s telecast was a marked expansion in the length of speeches given by the winners, who normally are “played” off by the orchestra if their thank-yous run past 45 seconds.

Filmmaker Steven Soderbergh, producing the Oscars show this year with Stacy Sher and Jesse Collins, went out of his way to encourage each of the recipients to “tell a story” and personalize their acceptance speeches.

The enlarged oratorical dimension of the show appeared to be welcomed by the star-studded audience at Union Station, but it remained to be seen how it would play at home with television viewers in the Oscar ratings, which have already seen a steady decline in recent years. JB

EDITORIAL: Raise the age of consent