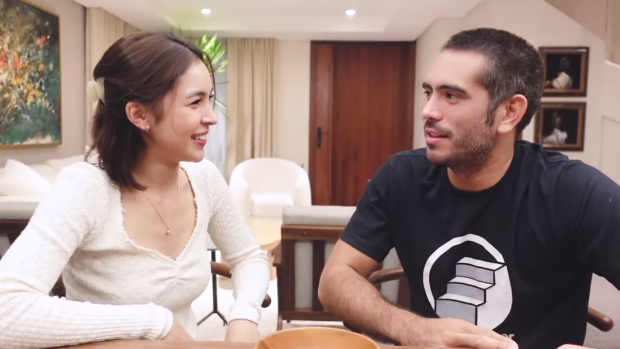 Julia Barretto admitted to her boyfriend Gerald Anderson that she has sent a sexy selfie to someone in the past.

The couple played a game of “never have I ever” revolving around acts of flirting and dating in Barretto’s YouTube vlog yesterday, April 24. They both took shots of alcohol for every instance that they’ve done something from a prepared list of “Never have I ever…” statements.

One of the statements picked by Barretto read, “Never have I ever sent someone a sexy selfie.”

“Never,” Anderson said after a brief pause. “Pwede naman nilang kunin sa Instagram ko.” (They can get [the photos] from my Instagram page.)

“To anyone ever? Promise?” Barretto tried to confirm as she poured some alcohol into her glass. Anderson noticed her doing this and threw the question back at her.

“So nagse-send ka ng sexy selfies mo? (So you send sexy selfies?)” he asked, to which she said she has “secretly” sent a sexy selfie at some point in her life. She did not provide any more details about the recipient of the said photos.

Barretto also revealed that she has drunk-dialed someone before, while Anderson said that he has hit on a stranger and kissed someone he did not know.

Anderson confirmed his relationship with Barretto last month. They have since appeared in public together to distribute relief goods for the actor’s birthday and to go fishing at the West Philippine Sea. JB