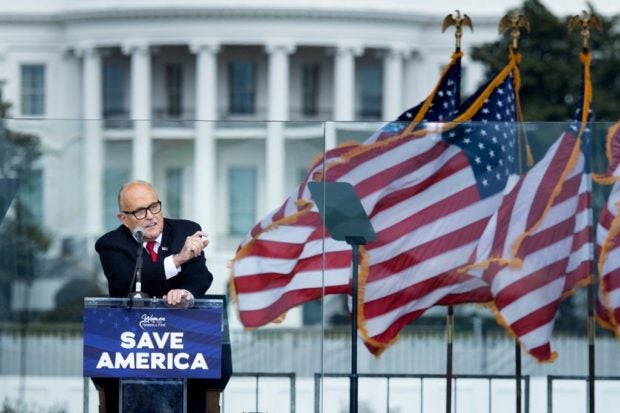 LOS ANGELES — The votes are in, and there is no point in Rudy Giuliani arguing with the result — Donald Trump’s lawyer was awarded two Razzies Saturday for his “performance” in “Borat Subsequent Moviefilm.”

The annual tongue-in-cheek Razzies, or Golden Raspberry Awards, “honor” the worst in film, and are handed out the day before the Oscars, serving to mock the following night’s self-congratulatory Tinseltown pageantry.

Giuliani, a former New York City mayor, didn’t even know he was appearing in the “Borat” sequel about a fictional Kazakh journalist — he was tricked into a fake hotel room “interview” with Borat’s attractive and flirtatious young daughter, played by Oscar nominee Maria Bakalova.

While Bakalova waits to find out if she has won a top prize from the prestigious Academy, Giuliani was Saturday named worst supporting actor.

He also shared the worst screen combo accolade with “his pants zipper,” after the infamous “Borat” scene ended with Giuliani apparently reaching into his trousers, oblivious to the hidden cameras.

He later insisted he was tucking in his shirt.

This year’s Razzies were topped by “Music,” a musical that drew controversy and mockery for its depiction of autism.

Worst picture went to “Absolute Proof,” a documentary by Mike Lindell, the Trump-supporting CEO of pillow manufacturer My Pillow.

The film, which pushes unfounded claims of fraud in November’s US election, was described by Razzie organizers as a “two-hour, fake news snooze-fest.”

Lindell was also named worst actor at the ignominious awards, which granted a “Special Governor’s Trophy” to the year 2020 itself for “The Worst Calendar Year Ever.”

The Razzies were first awarded in 1981 in a Los Angeles living room, the brainchild of UCLA film graduates and industry veterans, who chose the raspberry as a symbol of derision.