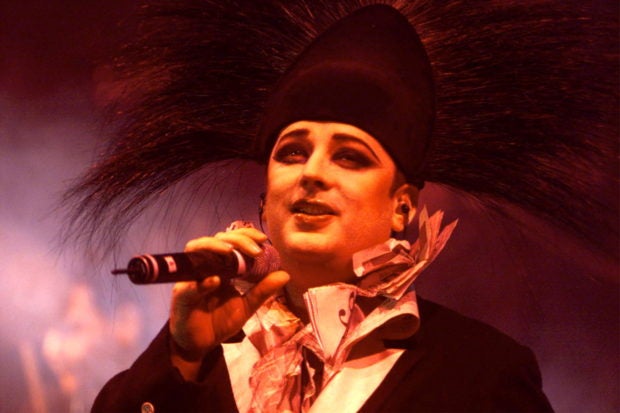 Boy George, from the British band Culture Club, performs in Singapore Feb. 18, 2000, while on his Don’t Mind If I Do World Tour. Image: Reuters/Simon Thong

LONDON — British singer Boy George launched a casting search on Tuesday, looking for an actor to portray him in a music biopic set to start filming this summer.

The Culture Club frontman, whose real name is George O’Dowd, took to social media to make the announcement. In a video, he said “Line of Duty” actor Daniel Mays would play his father, and added teasingly “there’s rumors of Keanu Reeves popping in”.

“I’m very excited to announce the movie of my life and Culture Club called ‘Karma Chameleon’ will be shot this summer in London and around the world,” he said.

“There’s only one problem, and it’s quite major: who is going to play me? We’re looking for a brave young actor, from anywhere in the globe, to take on the role of his life.”

The film, written and directed by Sacha Gervasi, will follow the singer’s “humble beginnings in an Irish working-class family, through his rise to the top of the international charts with Culture Club,” according to a press release.

The Grammy Award-winning Culture Club formed in 1981 and is known for chart-topping hits “Karma Chameleon” and “Do You Really Want to Hurt Me.”

The new film, financed and produced by Millennium Media, follows other music biopics released in the last few years, including “Rocketman” about Elton John and “Bohemian Rhapsody” about Queen.

“Boy George and Culture Club have been an inspiration to so many people. Specifically, George’s unapologetic way of being true to himself. He has paved the way for people to live their truth as fearless individuals,” Jonathan Yunger, co-president of Millennium Media, said in a statement.

“This is more relevant today than ever.” JB