Rising Fil-Am hip-hop artist Guapdad 4000 on how being biracial inspires his artistry, working with Chance the Rapper and Charlie Wilson | Inquirer Entertainment

Rising Fil-Am hip-hop artist Guapdad 4000 on how being biracial inspires his artistry, working with Chance the Rapper and Charlie Wilson 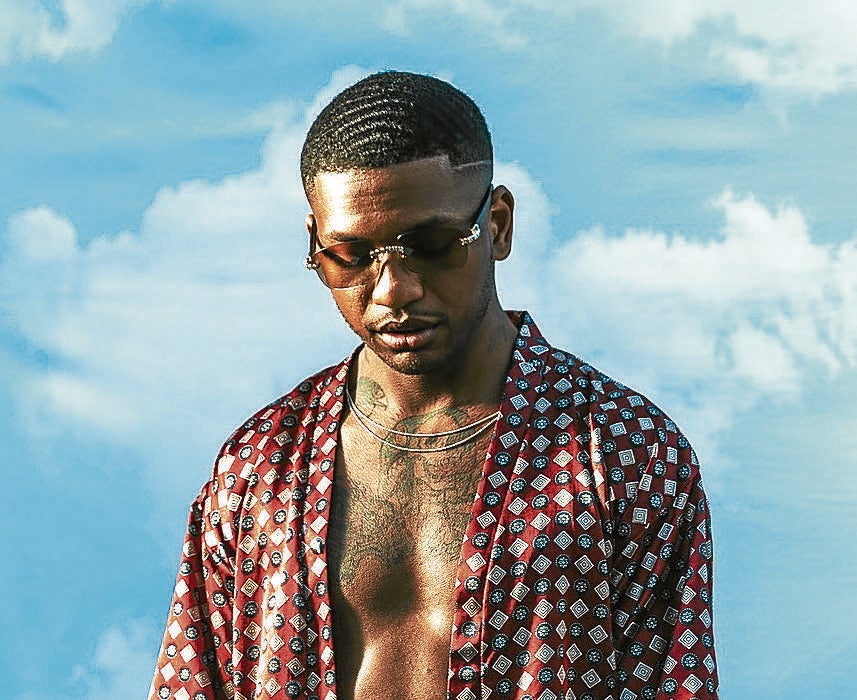 In his second and latest album “1176,” the rising Filipino American hip-hop artist Guapdad 4000 looks back on his childhood, his humble beginnings, and how growing up biracial shaped him into the artist and person he is today.

“I named it after the address of the house (Oakland, California) I grew up in. It was the first house my Filipino grandma looked at when she moved here from the Philippines, along with my grandpa, who was a merchant marine,” he told the Inquirer in a Zoom interview.

Born to a Filipino mother and a Black father, Guapdad 4000, whose real name is Akeem Hayes, described the new record as his “origin story. “I talk about where I came from, being biracial, death in the family, money in the family and money in the streets. I touch on a lot of subjects,” he said of the album, which was released just last month.

He moved out of that house four years ago. Last year, it was finally sold. But still, the memories and experiences will always stay with him. “I even had it tattooed here,” Guapdad 4000 said, showing his right hand. “I’m dedicated. And this just really shows how personal this project really is to me.”

Known for his lighthearted freestyles, quirky visuals and splashy fashion sense, the 28-year-old rapper has been steadily making inroads in the music industry for the past three years, thanks to hits like “Gucci Pajamas” (feat. Chance the Rapper and Charlie Wilson) and “Stuck with You” (feat. Tory Lanez).

The songs eventually made their way into his acclaimed debut album, “Dior Deposits,” which was named as one of 2019’s best albums by The New York Times. He also featured on three tracks on the Grammy-nominated album “Revenge of the Dreamers III” by the hip-hop record label Dreamville.

Meanwhile, “1176” is the “first full-length artist project” under Paradise Rising, the emerging Philippine sublabel of 88 Rising—the media company known for championing Asian music and culture. Founded in partnership with Globe, Paradise Rising hopes to give Filipino musicians the platform and resources to establish presence in the global stage.

“Being part of Paradise Rising is super cool,” Guapdad 4000 stressed. “It’s great to be part of a Filipino-focused initiative. I feel like a pioneer.”

Any memories or emotions you associate with your childhood home?

I can associate every emotion with that house! It was home base for me for so many years, so many things about life, I probably encountered there.

There are slow love songs, songs that can go viral, honest to God beautiful hip-hop songs and songs you can’t even classify into a genre.

Tell us about the carrier single, “How Many.”

It’s a letter to myself, a personal reminder for when I get lost or overwhelmed with things … to slow down and recenter myself.

Is that how you usually process things when things get too much?

Sometimes, I probably just need to cry, or suck it up and forget about it. But I do try to put them into music for sure.

The music video is fun and quirky, with you being trapped in a liquor bottle and all.

I like my visuals consistent and lighthearted, almost science fiction-inspired. And the characters I play in them exist in the same cinematic universe. 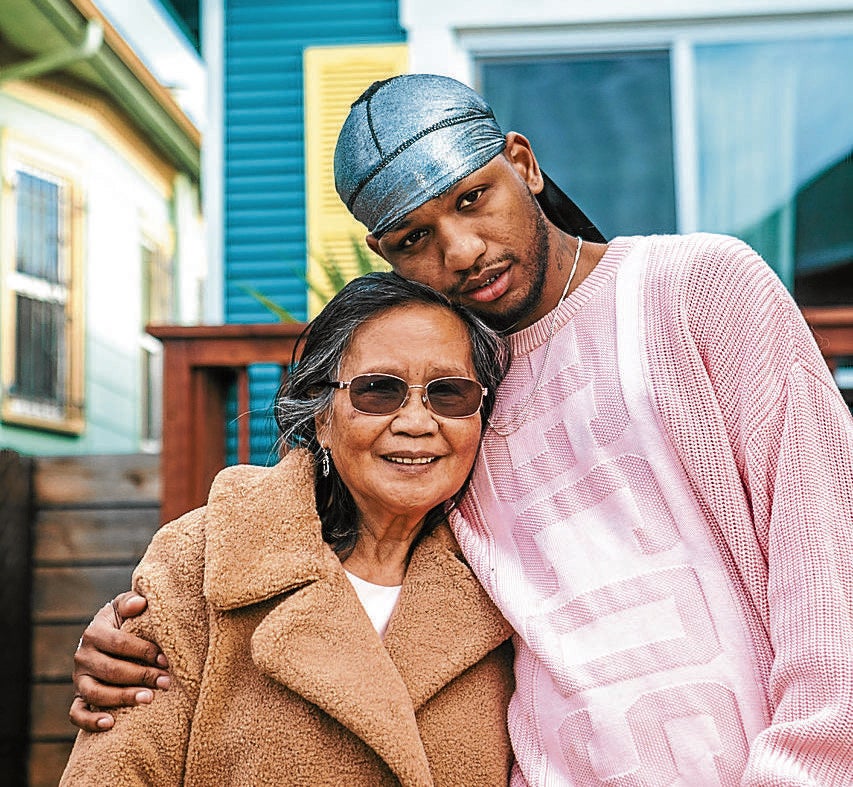 The singer-rapper (right) with his “lola.”

What do you enjoy most about doing music videos?

It’s fun because it allows me to create something I don’t normally do. I’m good at a lot of stuff except sports! But it’s fun to try my hand at new things and get better at them. I want to learn other people’s craft, combine inspiration and creative flames, so when I get to direct or help with the art direction, it all comes natural to me.

No one’s going to understand you but you. You know what you want and how you want things to look. And you’re just going to be bummed out when you spend money on something that didn’t turn out how you want it. You might as well be hands-on as much as possible, so you don’t feel that way when it’s time to roll the material out.

Your first album “Dior Deposits” received a lot of good reviews. Do you feel the need to replicate its success?

I don’t feel too much pressure; I just want people to listen to it. I’m happy “Deposits” was so well-received, but I didn’t plan for it. I just plan for who will listen to it, and I’m keeping the same mind-set for this one.

You had Chance the Rapper and Charlie Wilson on your 2019 single “Gucci Pajamas.” What’s it like working with your favorite artists?

It was life-changing working with artists like them on the same song. It was cool to connect with them. It was very eye-opening and I learned a lot … One of my proudest moments.

It definitely had more pros and cons. It’s cool to be Filipino and Black, because the food is great on both sides! I get to eat better than everyone.

A lot of my creativity comes from my background: my Filipino grandma was a seamstress. I have an aunt who paints and owns a music store. On my Black side, my grandma was involved in the arts … performing. I have uncles and aunts who are musicians as well. There’s much artistic affinity on both sides that I feel like it’s almost a cheat code to have that.

What are the similarities between the two cultures?

A sense of family and loyalty is something we both share. Respect for women in the family is something I have noticed that’s super heavy in the Filipino and Black sides of the family. My grandma is the absolute matriarch of things. Whatever she says or needs, we will break our backs to make sure she gets it.

And it’s like that on both sides. That’s something I have always admired. There’s also the respect for our elders and ancestors. I appreciate how I was raised.

And perhaps the sense of humor, too.

Filipinos are goofy! They get my jokes. We like to laugh and we love to sing karaoke.

But you said there were also some cons. What were the challenges?

Sometimes, some Black kids would ask questions they don’t realize are offensive. Or sometimes, older people act purposefully offensive. My mom looks Asian and I look Black, and some people would say weird things at times. Discrimination was always sneaking through the cracks.

I’m flamboyant with my taste in fashion. So, you have this handsome, flashy Black child walking around with this super modest, humble Filipino lady, and some would be like, “What’s going on?”

I also experienced some prejudice from older Filipinos, who would crack jokes about my dark skin. That hurt my feelings, too. So I had to dodge bullets from both sides.

I usually chalk racism up to ignorance. But sometimes, it’s done on purpose and that really hurts my feelings. But it’s something I have to learn how to embrace differently, because I have seen people get bent out of shape because of it.

But these things molded you into who you are now.

Definitely. I have thick skin … they made me mentally tougher.

How did your partnership with 88Rising and Paradise Rising come about?

I linked up with them at a festival. I did a couple of features for them and got to know the people in the team, like Rich Brian. We had some discussions, especially about trying to be more forward in letting people know that I’m Filipino; that I want to go out of my way to do stuff for us, and shine a light on what other Filipino artists people are doing. It just seemed a good fit.

What do you think about 88Rising’s advocacy and being the first artist to put out an album under Paradise Rising?

I think it’s super cool and it’s a beautiful opportunity for Asian artists in general to have this platform. I’m excited to see what everyone else are up to. And I’m just on board as a fan in general. I’m a fan of so many of their artists, before I was even part of it.

I’m now reaching out to a lot of people and getting familiar with people I didn’t know about. I expect to do more collabs with Filipino artists in the future. But now I’m just warming myself up.

What have you been doing to cope with the pandemic?

I never stopped working. I worked the whole time. I think I had only a month—all in all—of not doing anything.

I started cooking. I cook a lot now. I love seafood—salmon, white fish, seabass. I cooked sinigang, which earned my mom’s and grandma’s stamp of approval. I haven’t made adobo yet, though. I’m scared to cook that!