How did 'Game of Thrones' become such a 'phenomenon'? | Inquirer Entertainment
Close
menu
search

How did ‘Game of Thrones’ become such a ‘phenomenon’? 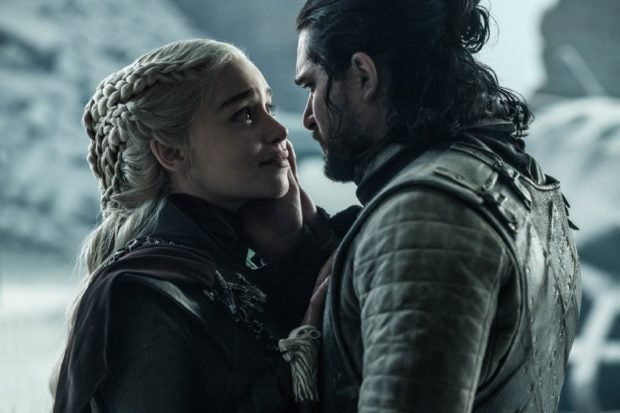 Emilia Clarke and Kit Harington in the season finale of “Game of Thrones.” Image: HBO

Winter came and went, leaving millions disappointed by the ending and a generation of adolescent boys exhausted from over-stimulation.

Many more wondered whether all the blood and bare bottoms were strictly necessary.

But few would argue that HBO’s “Game of Thrones,” celebrating its 10th birthday on April 17, was anything less than a televisual phenomenon.

Much to the chagrin of TV executives, figuring out how to repeat its global success remains as much a mystery as how anyone ever built a 700-foot wall entirely out of ice.

The non-stop sex brought controversy, especially when it was less consensual than in the original books, starting with the brutal consummation of Daenerys’ marriage to Khal Drogo in the first episode in 2011.

“I think they misjudged the audience at the very beginning… There was something quasi-pornographic going on there,” said Carolyne Larrington, a medieval literature professor at the University of Oxford and author of “All Men Must Die: Power and Passion in Game of Thrones.”

But overall, according to the experts at MrSkin.com, the show sits a lowly seventh in the all-time TV nudity rankings, with 82 nude scenes (74 percent female and a 4:1 vagina-to-penis ratio).

That’s far below “Shameless” and “True Blood,” with 236 and 137 nude scenes, respectively.

Gore was another attraction, with a catalogue of skin-flaying, eye-gouging, throat-slitting, horse-heart-eating carnage that, famously, refused to spare even the show’s main characters.

Their unpredictable chances of survival added to its addictive appeal as the deaths racked up, 59 in season one, soaring to 3,523 in the massacrous eighth and final season, according to data site Statista.

Still, there are more violent shows around and titillation alone cannot explain a viewership that reached 207 countries and saw 19.3 million people tune in live for the final episode in 2019 in the United States alone, according to HBO.

Media analysts Parrot Analytics said it was still the most talked-about show through 2020, a year after it finished.

Much of the credit must go to the spectacular way in which the world of Westeros was brought to life by showrunners Dan Weiss and David Benioff, and above all to the rich story-telling of George R.R. Martin, on whose books the show was based.

“What made the show so interesting were the twin poles of power politics and family,” said Larrington.

“How you gain power and how you exercise it… and how the young people spend the whole eight seasons looking for ways not to be like their parents or grandparents… these are what gave it its universal appeal.”

For all the criticism around its treatment of women, the story had complex female characters at its core.

“To maximize your audience, it’s no good for fantasy shows simply to have manly men doing manly things while the women are just damsels in distress or mothers looking concerned,” Larrington said.

Even for fans of the books, the success came as a shock.

“It’s still hard to believe that the show exploded into a phenomenon like it did,” said Myles McNutt, author of “Game of Thrones: A Guide to Westeros and Beyond.” “It could have been that Martin’s story was more accessible than we realised but it just had to be unburdened from the intimidating size of his novels.”

He said that the timing also helped, coming just as social media became a vital part of TV viewing.

“Game of Thrones” was indeed the show that launched a thousand memes.

Many even found their way into political discourse, from a British lawmaker warning that winter would come if people didn’t vote for Brexit, to then-president Donald Trump tweeting an image of himself in the show’s artwork with the words “Sanctions Are Coming” aimed at Iran.

It may be no surprise that concocting the next hit fantasy show looks challenging.

HBO has multiple prequels in development, though only one, “House of the Dragon” is so far greenlit.

Amazon, meanwhile, has forked out $250 million for the rights to “Lord of the Rings.”

But the stakes are high, as the makers of “Game of Thrones” found when the final series was vilified by fans for seeming rushed.

Some 1.8 million people and counting have signed a petition demanding it be remade “with competent writers.”

McNutt said that it was unclear how audiences would respond to new takes on their favorite parallel worlds.

“But HBO and Amazon are betting hundreds of millions of dollars that ‘Game of Thrones’ opened the door to a thriving future for fantasy television, and that’s definitely never something I would have imagined a decade ago when the show premiered,” he added. JB