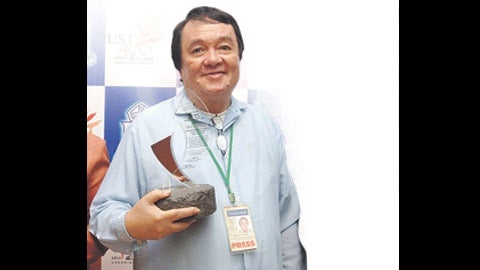 Nestor U. Torre at the 2010 Catholic Mass Media Awards when he was elevated to the Hall of Fame after winning his third Best Entertainment Column (Inquirer file photo)

Members of the entertainment industry honored Inquirer editor and columnist Nestor Torre Jr., who passed away at 78 years old yesterday, April 6, due to complications caused by COVID-19.

“Our friend left us only this morning, no thanks to [COVID],” she posted on Facebook yesterday. “He directed my first feature film, this man who refused to write his screenplays, stageplays and columns on the typewriter, no way on computers much later on, simply doing all of them by hand, on yellow legal-sized pad.”

“A loving son to his mama Isabel who passed just a teeny-weeny bit ahead, I see him now having a major argument with Behn Cervantes, while Bibsy Carballo just keeps on rolling her eyes. Godspeed, Nestor U. Torre Jr., our favorite NUT!” Orteza added.

Our friend left us only this morning, no thanks to CoVid. He directed my first feature film, this man who refused to…

Young actress Rita Daniela likewise paid tribute to the veteran writer-director and thanked him for featuring her in his stories back then.

(Sir Nestor Torre, thank you very much. You are one of the respected journalists who wrote about me when I was a kid and was just starting in the industry.)

“Classic, guguntingin ang section, ididikit sa bond paper at itatago (Classic, I would cut out the section, paste it onto a bond paper and keep it),” she recalled, sharing photos of the said newspaper clippings.

The Film Development Council of the Philippines (FDCP) also paid tribute to Torre, whom they described as “one of the highly respected columnists in the country for his extensive knowledge and experience in the entertainment industry.”

“He also left behind his filmography with directing, writing, and acting credits under his name. Some of the films he directed are the ’70s classics ‘Crush Ko Si Sir’ and ‘Ang Isinilang Ko Ba’y Kasalanan?'” the FDCP noted.

“His remarkable contributions to the entertainment industry will always be remembered,” it added.

The Film Development Council of the Philippines mourns the passing of industry veteran Mr. Nestor U. Torre, Jr. on April…

Posted by Film Development Council of the Philippines on Tuesday, April 6, 2021

Torre, a four-time Palanca awardee, had been with the Philippine Daily Inquirer since its early days in the mid-’80s.  He edited a number of sections in the paper and was popular for his daily column Viewfinder, which he only stopped producing after suffering from a stroke in 2018.  /ra