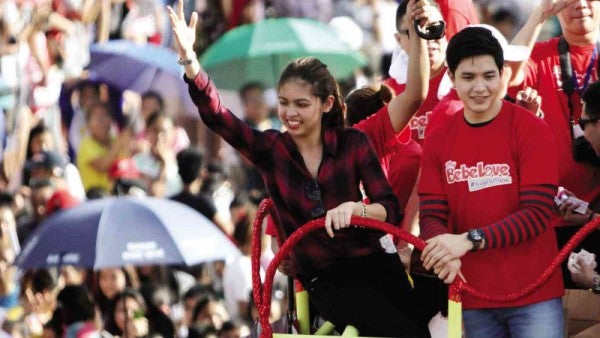 Fans of Maine Mendoza and Alden Richards’ AlDub love team are calling for the boycott of the sitcom “Daddy’s Gurl” after Mendoza got paired with real-life partner Arjo Atayde in an episode.

The “AlDub Nation” (ADN) has been making its mark on Twitter for over 20 days now as it made several hashtags trend to protest the pairing of the couple.

Aside from “Daddy’s Gurl,” the fans are also calling for the boycott of “Eat Bulaga” as well as the two programs’ producers, M-ZET Productions and APT Entertainment.

The fans were able to make the hashtag “#TBADNBoycottMZETxAPT18” yesterday, March 25, with 18 being the number of days they have been using the hashtag. According to one AlDub fan, they were able to make another hashtag trend for another six days prior to the aforementioned one.

“This boycott move of TBADN will cont until Everyone involved in d zarsuela acknowledges the reality of ALDUB & ALDUBNATION. We r a family that loves, supports & protects ALDUB & their advocacies,” one fan tweeted, sharing a poster for their online movement.

This boycott move of TBADN will cont until Everyone involved in d zarsuela acknowledges the reality of ALDUB & ALDUBNATION. We r a family that loves, supports & protects ALDUB & their advocacies… #TBADNBoycottMZETxAPT18 pic.twitter.com/OunPc92nBU

“#ALDUB297thWeeksary #AldenRichards #MaineMendoza Whatever happens, I’ll choose the Faulkersons!#TBADNBoycottMZETxAPT18,” another fan posted, referring to the fictional tandem of Mendoza and Richards as the Faulkersons.

The fans are also calling for the boycott of several products that have their advertisements appear in between commercial breaks of M-ZET and APT shows, including their shows’ sponsors.

The ADN has since started tweeting using “TBADNBoycottMZETxAPT19” earlier today, March 26. One fan even started a word game to get the tweet count up for the said hashtag.

“Don’t let someone to change who you are, to become what they need.” – Unknown@aldenrchads02 @mainedcm#TBADNBoycottMZETxAPT19 pic.twitter.com/KoJwCb06yO

Atayde, who has been in a relationship with Mendoza for over two years now, appeared in the March 6 birthday special episode of “Daddy’s Gurl” for the actress.  /ra