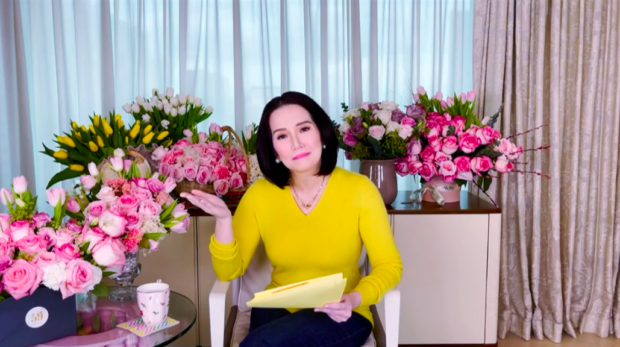 Kris Aquino has revealed that she tried to rebuild her relationship with ex-boyfriend and former Quezon City mayor Herbert Bautista.

Even though their relationship did not last for long, the Queen of All Media admitted that Bautista still held a special place in her heart. But before she decided to reconnect, she consulted her youngest son Bimby, she said in the first of a tell-all series of video posts on her Instagram page today, March 21.

“We (herself and Bimby) recently discussed Herbert Bautista, because the two of us tried to reconnect. But as a mom, I knew I needed Bimb’s permission,” she said.

“Nu’ng pinag-uusapan namin, sinabi niya, ‘I can see, mama, how you still look at him. You do not look at others the way you look at him. If he is your happiness, then he has my vote,'” Aquino added.

(When we talked about him, he [Bimby] said, ‘I can see, mama, how you still look at him. You do not look at others the way you look at him. If he is your happiness, then he has my vote.)

Aquino clarified that she was not using the word “vote” for Bautista’s political career, or to build a career of her own in politics.

“HB’s plans, his political plans, whatever plans he has, they are his own,” she clarified. She also dispelled speculations that her eldest son Josh relocated to Tarlac province to establish a name for her politically.

“Kuya Josh happens to be very happy in Tarlac. He is not there para mag-establish ako ng presence in the same province where my father and my brother started their public service journeys,” Aquino stated.

In a statement earlier this month, Aquino said she was “running away from love” after experiencing autoimmune conditions and high blood pressure from “seven years of emotional stress,” pushing her to relocate away from the city. She did not name any person then.

She also talked about her absence in free TV, which she considers her life’s work, in a second video that she posted also today.

“I was told, ‘Mahirap nang ma-offend ang palasyo.’ I took that kasi political reality ‘yan,” she said. (I was told it would be difficult if the Palace gets offended.)

Despite the circumstance, she said she is still wishing the current administration well because political divisiveness would not help amid the pandemic.

However, she said this political divide also led to her efforts in helping early in the pandemic being misinterpreted as a political move.

“Hindi po ako kagaya ng iba. Hindi po ako epal. Wala po akong agenda,” she reiterated. (I am not like others. I am not a credit-grabber. I have no agenda.)

She also told supporters of President Rodrigo Duterte to stop bashing her because she does not recall any time she may have done something to offend him.

(I know I never attacked him. So for Duterte’s supporters, we have no reason to be enemies.)

She said she continues to pray for the current administration, especially amid the pandemic. JB

Kris Aquino on what to expect from her tell-all: ‘My true feelings will be revealed’