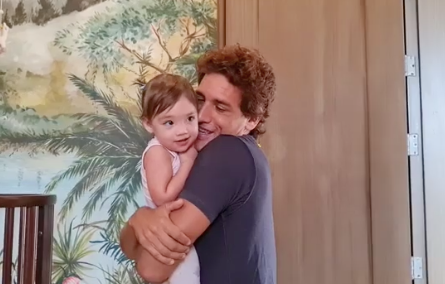 Nico Bolzico finally reunited with his wife, Solenn Heussaff, and their daughter, Thylane, having come home from his Argentina trip.

Heussaff was able to capture Bolzico’s heartwarming reunion with his baby daughter on camera, which the couple shared with fans on Bolzico’s Instagram yesterday, March 15.

The father immediately picked up and hugged Thylane upon entering the room, telling her several times that he missed her so much, as seen in the video.

“Reunited w my girls! My heart is full again! We stayed sit there for like an hour!” he said of the video.

Bolzico last month went to Argentina and spent a few weeks there with his relatives and parents, whom he described in an earlier post as the main reason he goes to Argentina,

“I think that becoming a father makes you a better son!” Bolzico said in the Instagram post on March 8.

Upon his arrival in Manila last week, Bolzico spent seven days quarantined at a hotel before he got to finally be with his wife and daughter.

Bolzico and Heussaff will be celebrating their fifth wedding anniversary this May. Thylane, meanwhile, turned a year old last New Year’s Day.  /ra

Maxene Magalona to cleanse, detoxify in quarantine as she returns to Manila from Bali

WATCH: Nico Bolzico’s wacky ‘tutorial’ on how to carry a baby