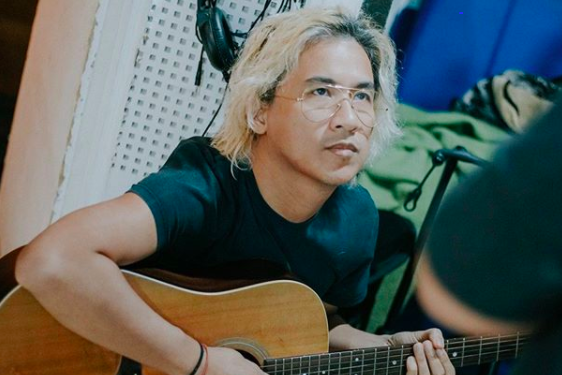 Tearing down the mythology that had been formed in around two decades, OPM icon Ely Buendia has finally revealed the true meaning of the hit Eraserheads song “Spoliarium.”

The former Eraserheads frontman debunked the urban legend that the song refers to the rape case of former “Softdrink” star Pepsi Paloma in the ’80s, as heard in the March 7 episode of Jim Bacarro and Saab Magalona’s podcast.

“‘Spoliarium’ is one of those cases where, really, the myth has sort of taken over the facts and I kinda like it. I kinda like the myth. Because the actual meaning of the song is also, again, just really mundane,” Buendia told the “Wake up with Jim & Saab” hosts.

“It’s all about getting pissed drunk,” the musician said, explaining that the “gintong alak” (golden alcohol) they were referring to in the song was the literal alcoholic drink Goldschläger.

People have long been theorizing that the Eraserheads song is sort of a jab at television hosts Vic “Enteng” Sotto, Joey de Leon and Richie d’ Horsie, who were the suspects in the rape of the young actress in 1982. Three years later, Paloma died allegedly by suicide.

“Spoliarium,” which was written by Buendia, was released in 1997 as part of the “Sticker Happy” album.

While the song does mention “Enteng and Joey,” Buendia clarified that they were just referring to their road managers back then, not the popular TV hosts.

“Spoliarium,” which borrows the name of the classic Juan Luna masterpiece, turns out to have been about drinking all along. Buendia acknowledges, however, that the dots fans connected between the lyrics and the rape case are “okay” but are just coincidences.

“They were roadies. Kaya first time ko nabasa ‘yun, that urban legend, sabi ko, ‘Wow, okay ‘to ah!’ There really is, sometimes, ‘yung mga coincidence like that. You have no power over that. It just happens,” the rock star said.

(They were roadies. So on the first time I read that, that urban legend, I said, ‘Wow, this is okay!’ There really [are] sometimes, coincidences like that. You have no power over that. It just happens.)

Despite stating that the meaning behind it is just “mundane,” Buendia emphasized that “Spoliarium” is “one of those songs that I’m really proud of.”

“You know I’m really proud of it if I sing it live all the time,” the rock star added.

Buendia noted, however, that while the song is the result of a hangover and getting drunk, people are still free to think about the song the way they want to.

“But you know, whatever people wanna think about that song, it’s fine. That’s the beauty of it,” Buendia said.

After the big reveal, Buendia then asked the hosts, “Are you disappointed?” to which Magalona replied, “Not at all. I’m just happy that we got this exclusive!”

“Pero pustahan tayo kahit sinabi ko na ‘yan (But I bet you that even though I have now explained this), the myth will still go on,” Buendia stressed.  /ra

Read Next
I still don’t believe Meghan, says Piers Morgan
EDITORS' PICK
Gilas out to prove Korea win not a fluke; Tab fires back at ‘lucky shot’ remark
Smart brings KCON:TACT especially 4U to subscribers from June 19 to 27
Smart celebrates all kinds of ‘#SimplyLove’ for Pride Month
SWS: Over 12M Filipinos still jobless as of May 2021
Brazil set to pass half a million COVID-19 deaths
WATCH: INQside Look with Fil-Am actress Aina Dumlao
MOST READ
Underdog Dasmariñas vows to fight to the death vs Inoue
PH internet speed middle of the pack worldwide – DICT
Knowing what drives China in SCS
Kai Sotto, Angelo Koaume lead Gilas roster anew for Korea rematch
Follow @IBiongINQ on Twitter
Don't miss out on the latest news and information.