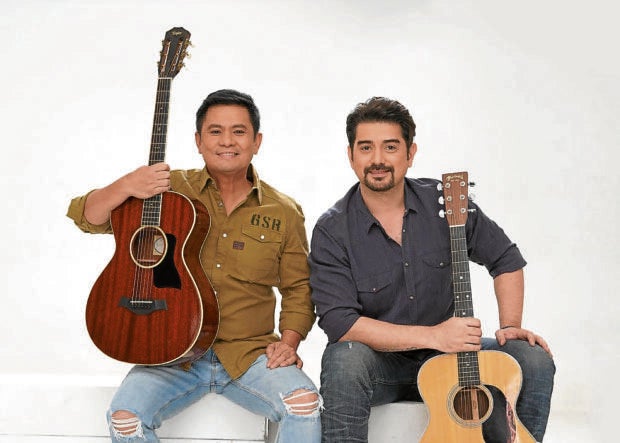 At 53 and 46, respectively, Ogie Alcasid and Ian Veneracion are at a point in their lives where younger people are starting to call them “titos.” And while that may be technically true, the two artists insisted that they don’t really feel their age—that the fun-loving and, at times, mischievous selves haven’t really left them. For Ogie, it’s Nate, his 9-year-old son with Regine Velasquez, who keeps him feeling young.

“Now that we’re staying at home, I have realized that I have to start teaching him things. I used to be heavily into martial arts. It’s not obvious, but I love them! So, I have been training again to teach him,” he told the Inquirer in a recent video conference for “Virtually Yours, Kilabotitos,” his upcoming digital concert-comedy show with Ian on March 26.

“My son keeps me young. Sometimes, we play games I used to play like chess, backgammon and snakes and ladders,” he added. “Nate doesn’t get to see his playmates, so I play with him.”

In his occasional bouts of zaniness, Ogie would dress up as different characters at home for the laughs. Some of the personas he made up amid the quarantine are the crooner Eydie Wow, his doo-wop backups, the Wawettes, and their manager, Mrs. Nubla.

“There are times when I question myself why I still wear women’s clothes at my age, at my home. I still love to play around,” he said, laughing. “I still have ‘Voltes V’ toys. So I never really grew up—or grew for that matter!”

Ian, on the other hand, jested that he probably stopped getting old at 14. “I don’t think I have really matured after that age! Yes I’m getting older, but my brain, my kakulitan and kapilyuhan are still those of that 14-year-old-boy,” the actor and music lover related. In fact, he feels that even his three teenage kids behave more like adults. “I don’t think I have matured mentally. I goof around, I tell green jokes … And sometimes ako pa ang napapagalitan ng mga anak at asawa ko!” quipped Ian, whose love for sports and other outdoor activities keep him young.

“When I play basketball, badminton or football, some of my friends would tease me that I should stretch. And I thought, yes, I think my movement can’t be the same when I was younger. Luckily, I don’t feel anything weird. I feel the same way, even when I’m rock climbing,” he added.

The first show biz person who called him“tito,” Ogie recalled, was Lovi Poe years back. “We share the same talent manager, Leo Dominguez, and she always called me ‘tito.’ Ang sakit!’” he jested. “And then when I transferred to ABS-CBN (in 2016), I met a lot of young singers, like Moira dela Torre, etc. And tito na talaga.” “But I’m used to it now. It’s the reality. Come on, I’m 53. I’m in the prime of my pagka-tito!” he added.

In Ian’s case, it was Bea Alonzo who first called him such. “It was my first time meeting Bea. It was for our drama series titled, ‘A Love to Last.’ She asked me if she could call me ‘tito.’ So I was like, ‘Tito mo mukha mo … Don’t you make that mistake!’” he recalled, laughing. “But seriously, it was OK. She kept on laughing at me. And we became friends instantly.”

Mounted by A-Team, “Virtually Yours, Kilabotitos” was initially planned as a live concert last year. But because of COVID-19, they decided to just turn it into a digital show, instead of waiting for the live scene to open, which remains uncertain. It will be shown on KTX.ph, and will have Ogie and Ian performing hits by artists they love and grew up listening to, like The Beatles, Stevie Wonder, Michael Jackson, Hall and Oates, and The Police. The best thing about their show, Ian pointed out, is its unpretentiousness. They’re sticking with their audience; they won’t try and pretend they’re trying to capture the younger generation.

“We’re proud of our generation and this show is for us—the music, humor, asaran, the memories will all be relatable. We want to highlight hits from the past eras (1960s to ’90s). We will all reminisce and listen to music they haven’t heard in a while,” Ian said.

“True enough, during one of our past meetings (for the originally planned live show) at a restaurant, there was a group of titas waiting outside, itching to have photos taken with Ian. And I thought that Ian is really a tita killer,” Ogie joked. “But I believe it only confirmed that those people who watch his series or grew up watching ‘Bubble Gang’—those are our market.” INQ