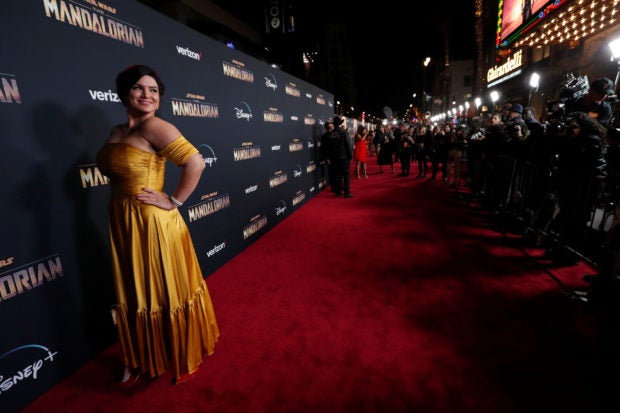 Lucasfilm, the Walt Disney Co-owned movie studio, said on Wednesday that it had ditched Gina Carano, a lead actor in its TV series “The Mandalorian,” over social media posts that drew parallels between the persecution of Jews in Nazi Germany and current hate towards people with different political views.

“Gina Carano is not currently employed by Lucasfilm and there are no plans for her to be in the future,” a Lucasfilm spokesperson said in a statement.

“Nevertheless, her social media posts denigrating people based on their cultural and religious identities are abhorrent and unacceptable,” the statement added.

Neither Carano or her representatives could be reached immediately for a comment.

“The Mandalorian,” which runs on Disney+ streaming service, is a live-action series set in the galaxy far, far away that was first seen on screen in the 1977 movie “Star Wars.”

“Jews were beaten in the streets, not by Nazi soldiers but by their neighbors … even by children,” the report said quoting the post.

“Because history is edited, most people today don’t realize that to get to the point where Nazi soldiers could easily round up thousands of Jews, the government first made their own neighbors hate them simply for being Jews. How is that any different from hating someone for their political views.”

On Twitter hashtag #FireGinaCarano was trending, with users posting comments mostly criticizing her.

Carano has previously come under fire for posts on Twitter in November in which she derided mask-wearing amid the COVID-19 pandemic. In a different tweet that month she also claimed there had been voter fraud during the 2020 presidential election.

Lucasfilm had planned to unveil Carano as the star of her own Disney+ series, but dropped those plans after her November tweets, the Hollywood Reporter said, citing unnamed sources.