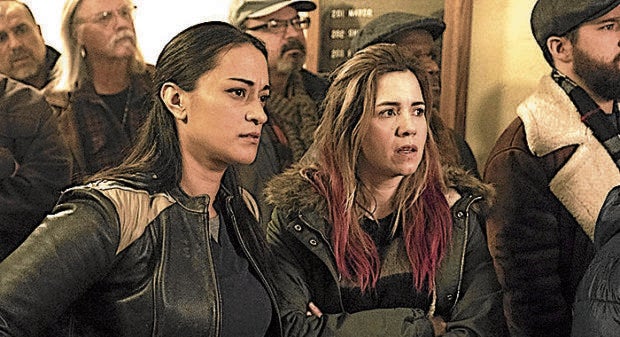 They’re part of a new sci-fi show that’s getting a lot of love from both critics and televiewers. On Rotten Tomatoes, “Resident Alien’s” average rating from critics is 93 percent, while its audience score is 90 percent.

Sara Tomko and Alice Wetterlund are in the main cast of the comedy series, which follows the misadventures of a stranded extraterrestrial creature on Earth. The alien uses the identity of a dead New York City doctor, Harry Vanderspeigle (Alan Tudyk), to avoid unnecessary scrutiny from the residents of a rustic American town (population: 1,000) in the middle of nowhere.

The review aggregator site commends the 10-episode series “for finding fresh humor in a familiar framework” that provides “a showcase for Alan Tudyk’s singular comedic skills.”

But Alan isn’t the only one getting noticed for his portrayal in the show: As Asta Twelvetrees, Sara plays Dr. Harry’s stern but sympathetic assistant whose backstory is littered with tales of teenage pregnancy and domestic abuse, while actress-cum-stand-up comedian Alice is cast as wisecracking bartender D’Arcy Bloom who feels that her life has already reached a dead-end after her heyday as an Olympic skater.

Asked how D’Arcy’s self-esteem issues and feelings of being a “has-been” resonated with her, Alice mused, “Working on the role was a bit of a collaborative endeavor with [showrunner] Chris Sheridan and me. I have to ground this very funny, very party-centric character and give her a backstory that explains why she’s broken.

“But playing D’Arcy resonated with me very easily because, you know, I’m in recovery—which is something I don’t talk about in the press a lot. It’s hard for me to discuss. But that makes it easy for me to imagine what it’s like to have been a has-been, even though you’re still young.

“That’s how Darcy feels. She’s given up because when you’re young, you have a bright future. Then, it all goes away! But that hasn’t exactly happened to me—because I’m now in this great show.”

Sara interjected, “That’s really cool, Alice! I never really thought about what happens to an Olympian when they get hurt and can’t perform anymore. It never really occurred to me how relatable your character’s story is to certain types of careers that can only last so long while you’re young.”

With her character’s backstory being “more dramatic” than most, we asked Sara which traits of Asta’s personality and story suited her the most and which aspects of her life is closest to hers.

“I think it’s Asta’s sense of not knowing how she fits in,” Sara shared. “You can’t put us into a box—and I feel that way about myself in mind, body and spirit, I have a very eclectic style. I’m a mix of many things, and that’s one of the things that I relate to the most about Asta. 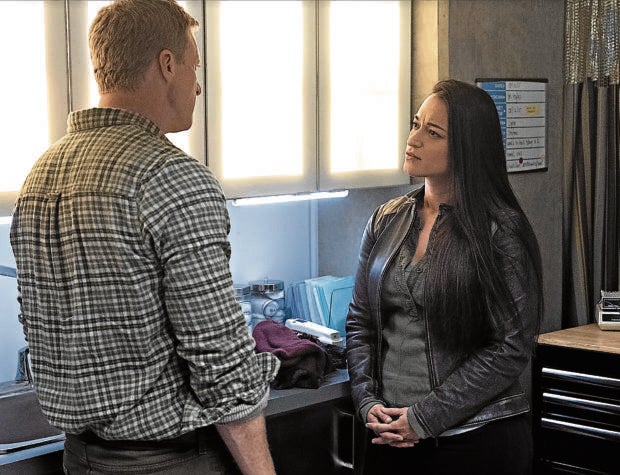 “Alice had mentioned to me before … that she’s gone through a lot of grief, and it was isolating her. It was making her feel like, despite having real family around her, she didn’t see that support as easily. I’ve been fortunate to have an incredible family and friends around me, but there have been plenty of times where my own anxiety has been the thing that got in the way.

“Alice mentioned the word self-sabotage. I feel like that is something I, as well as a lot of other humans, relate to. Asta is trying really hard to figure herself out, but she’s also trying to be OK with being a mess.

“I’ve learned that our fears and anxiety are so much worse in our heads because, in my case, when I show up to work, I have the best time! I’m gettng emotional just talking about it, but yes, it is the best place to be. I’m surrounded by a cast and crew who would never let me fall.

“And this relates to what I was telling you about humility. I have to be OK making mistakes as a human being, because it’s my first time figuring out this big set in this big world in Asta’s mind, and she gets overwhelmed by it all. So, it’s nice for her to have her best friend Darcy around, who keeps her laughing while reminding her to stay grounded and to not float up into her anxiety.

“I have not had to deal with a physically abusive relationship, but I have certainly dealt with mental abuse in a relationship before, and I’m really glad we get to show Asta standing up to that!”

On a lighter note, how would Sara and Alice react if they met a real alien?

“I’d probably be very scared but curious,” Sara said. “So, I would stick around to see what the alien does.”

“And no sudden movements, OK?” quipped Alice. “We won’t understand what they’re saying, so even if they take out a gun, it could be a happiness laser or a make-all-your-dreams-come-true gun. Who knows?”

More than the show’s out-of-this-world concept, both women love the flawed but fascinating characters they get to play in the show.

“The show is incredibly warm and wonderful—it’s a great mix of comedy and drama. I love sci-fi, but my character is, for lack of a better term, a badass,” Alice said. “And she’s the comic relief—and that’s me. It’s honestly a dream character for me in every way.”

Sara doesn’t necessarily think that Asta’s a badass, she enthused, “Although some people in the room look at her that way, she has her own raw, vulnerable, messy, layered and complicated thing going on, which I relate to.”

And then there’s the thrill of working with lead star Alan Tudyk.

“Alan shows up to work and he does nothing that he says he’s going to do,” Sara said. “He’s just so spot-on. It’s organic and fresh, especially for Asta who’s always the one yelling at Harry and trying to be serious. There were so many times that I had to try so hard not to break out of character when he’s doing the craziest stuff, sniffing body parts—like, he just is so bizarre! In this role, his comedy is genius.”

Even a seasoned stand-up comic like Alice is impressed by the 49-year-old actor. “Alan has been around for so long, but he’s never been the center of a show—he’s never been the main dude,” she noted. “And to watch somebody who has paid his dues so well for so long, who just happens to be a beloved sci-fi person, and watch him step into that, it’s very satisfying to see. Alan does it with grace and dignity. He’s ready—and it’s so cool to be a part of that type of situation.” INQ