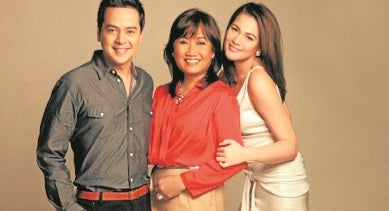 I see pain in their eyes,” said filmmaker and star-maker Olivia Lamasan when asked to share with Inquirer Entertainment how she effectively spots would-be show biz superstars.

“They have this certain X factor in them. When they are asked to say something really personal about themselves, you’d see pain in their eyes,” said Lamasan, who then went on to recall the time she first saw American-Filipino Soberano in an audition session.

“I had a fever during the auditions so I wasn’t really in the mood. Mr. M (Johnny Manahan, former head of Star Magic) had asked 30 people to stand up in front of us,” said Lamasan, adding that Charo Santos-Concio (former ABS-CBN president and CEO) and Malou Santos (Star Creatives COO) were also present.

“I remember looking at the kids. Jane de Leon and Heaven Peralejo (now both Star Magic contract artists) were also among the 30, but back then I felt ’di pa sila hinog. My eyes just went past them but lingered on girl No. 20. When Mr. M asked, ‘Who do you think is OK?’ I said, ‘just her.’ Liza was very shy and quiet, but she had something about her. She was pretty, but not as pretty as she is now,” Lamasan recalled.

“But when she shared something about the time she was brought from the United States to the Philippines, I saw pain flash in her eyes. I said, ‘This girl has something special in her,’ but it took a while before other people saw that special something. One director even dared to ask me, ‘What did you see in her, Inang? There’s nothing!’ I defended Liza by saying, ‘Mayro’n! Pagtiyagaan n’yo lang.’

“When the young girl finally gained confidence, that ‘something’ finally came out. She’s brave, driven, and most of all, smart,” Lamasan said.

Soberano was born in California, where she was raised by her paternal grandparents when her parents separated. She moved to Manila and lived with her father when she was 10. She began modeling at 13. These days, with various product endorsements and box-office hits under her belt, Soberano is among the country’s most influential celebrities and one of ABS-CBN’s top moneymaking talents.

John Lloyd Cruz was just 13 when Lamasan first saw him. “During the tryouts, his gaze was focused on something distant when I told him to tell me something about himself. I saw pain in them, too. I just didn’t know where it was coming from. Charo and I looked at each other. I said, ‘He’s going to be a star!’”

Cruz decided to enter show biz to help his family recover from financial problems. At age 14, he signed up with Star Magic and first appeared in the teen drama “Tabing Ilog.”

Lamasan then recalled the time she predicted that dramatic actress Jodi Sta. Maria would become a celebrity. “I told Charo, ‘Jodi will not be your usual star. She’s going to be a character actress.’ I said that when Jodi was just 12 years old!”

As George, Sta. Maria was the youngest cast member of the iconic series “Tabing Ilog.”

Lamasan said she first encountered British-Filipino Alonzo when she was scouting for talent to be partnered with Cruz in the TV series “Kay Tagal Kitang Hinintay.”

“Pia (Wurtzbach, 2015 Miss Universe) and Angeline (Aguilar) were also present in that audition. When Bea walked across, I screamed, ‘’Yan!’ She was only 14,” said Lamasan. “These days, I can’t help but laugh whenever I remember telling Bea and John Lloyd, ‘In order for this love team to last, I hope you don’t fall in love with each other.’ I guess they heeded my advice. I still felt the kilig years later, when I was directing them in ‘The Mistress.’”

Probably the latest addition to her collection of gems is 23-year-old Joshua Garcia, whom Lamasan said she first noticed while the latter was competing in the reality talent search “Pinoy Big Brother.”

“Whenever I’d watch that particular season of PBB, my eyes would always focus on Joshua. He had kept saying he wanted to become an actor, but while inside the House parang tamad-tamaran lang siya,” said Lamasan. “I would ask myself, ‘Joshua is so lazy, but why is it that I see something in this boy?’”

This was why when she was assembling the supporting cast for Kathryn Bernardo and Daniel Padilla for the dramatic film “Barcelona,” Lamasan asked Manahan: “Can I try that boy, Joshua Garcia? I want to test if my gut feel is still strong when it comes to spotting talents.”

Lamasan added: “True enough. It’s still there … and Joshua isn’t lazy after all.”

After playing support in “Barcelona,” Garcia starred in two hit romantic drama films: “Vince & Kath & James,” and “Love You to the Stars and Back,” both opposite ex-girlfriend Julia Barretto. He is currently working on the local adaptation of the Korean drama “Keys to the Heart,” opposite Santos-Concio, no less. INQ