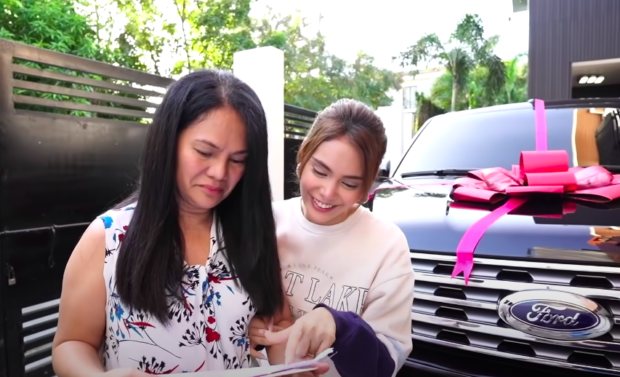 As far as pranks go, Ivana Alawi’s latest one may just have taken the cake — her whole family turned emotional after she gave Mama Alawi a new car.

Just a few months after surprising her brother with a piece of land, the actress-vlogger gave her mother a brand new Ford Expedition, as seen on her YouTube vlog posted on Jan. 9.

Alawi took fans along in choosing the right car for her mother in the said video, where she noted that she would also like to buy cars for her siblings too before she gets one for herself.

For the said “prank,” Alawi and her brother, Hash, pretended to get in a fight while they were shooting a video with their mother.

As the “fight” escalated, Hash pretended to leave their home and hid behind the brand new car. When they finally revealed that it was all a prank and that the car is hers, Mama Alawi was left in disbelief and could only say, “Kayo nga lang masaya na ako eh (I am already happy just having you guys).”

Both Alawi and her brother also noted that this was the first time they saw their mother cry as they went in for a hug with Mama Alawi and their younger sister Mona.

The whole family eventually broke into tears and celebrated having the new car. The vlog then aptly ended with Mama Alawi driving her new car with her children as her first passengers. JB