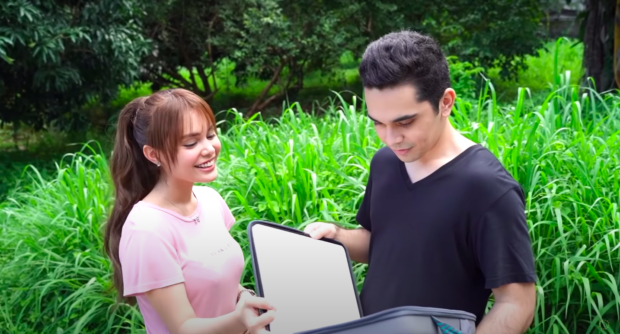 Ivana Alawi brought her brother Hash to tears after giving him his own plot of land near the site of her future home.

The actress-model decided to surprise him with the lot since he refused her offers to buy him items such as luxury watches. She explained that Hash is a simple man and does not splurge on shopping, as seen in her vlog post on YouTube last Tuesday, Sept. 15.

Ivana also noted that the plot of land is a practical gift that her brother can surely use in the future.

(He can put up a house for his future spouse and children.)

The gift will keep their family close as well since Ivana will be sharing her upcoming house with her mother and younger sister, Mona.

Alawi managed to bring Hash along to the subdivision by saying that they need to check on her new lot. However, Hash was unaware of his sister’s real plan to surprise him.

After checking up on the site of her new home, Ivana, Hash and their mother drove to her brother’s lot. The actress-model then handed Hash a briefcase-style bag and joked that they were on the game show “Deal or No Deal”.

When Hash opened the bag and read the land title, he initially thought Ivana was pranking him. After Ivana assured him that it was real, Hash suddenly held back tears.

“It’s too much Mariam,” he told his sister, addressing her in her real name. “I can’t believe it.”

Ivana then explained that she was able to get his name on the title by asking him to sign papers before, which he apparently did not read.

Along with her work as a model and actress, Ivana has also ventured into music as a singer. She released her debut single titled “Sana All” last February. JB