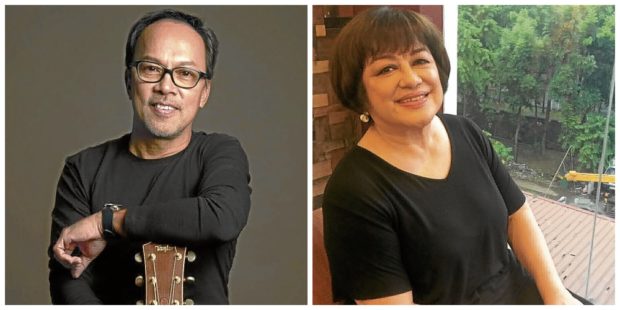 The COVID-19 pandemic and the resulting lockdown presented all sorts of issues for local music artists this past year. And for the more seasoned ones, like Mitch Valdes and Noel Cabangon, one of the trickiest aspects was making the transition from live shows to the digital space.

But they sang and played on nonetheless.“As an artist who makes income mainly from live performances, this quarantine taught me how to adapt to the situation. I was forced to pivot from live to online performances,” Noel told the Inquirer in a recent interview.

The renowned folk singer-songwriter, who converted his living space at home into a “gig space,” has been taking part in various fundraising events and holding a monthly concert series aptly called “Dito sa Bahay.”

Mitch, on the other hand, was admittedly at a loss at first—overwhelmed by the number of apps and software she had to learn and use. And she did find her way around, thanks to her millennial nephews and other colleagues. But performing online, at least for her, can still be “lonely.”

“I believe a performer is a mirror dance with the audience. Sometimes, in the process, they push your boundaries, then you get them to try out other stimuli. But when this relationship gets shut down and you have to move to technology as a performer, it’s like being lost in space with no ground to walk on,” Mitch told the Inquirer.

“But you do it anyway and hope that you touch someone, wherever,” stressed the singer-actress, who coheadlined last year a paid digital music-comedy show dubbed “Mitch and Mel Online” with AMP Band’s Mel Villena. “But it can be a lonely thing … this one-way performance.”

But it’s not all bad. Though the quarantine was a crippling blow to the live music scene, it did compel Noel to focus on writing new songs, including the collaborative singles, “Habang Buhay,” with Leanne and Naara, and “Pag-ibig,” with Aikee.

As a composer, he has never been more productive.

“As an artist, 2020 somehow gave me time to be more creative. I came up with nine songs [within that span], which I haven’t done before in my entire career,” he revealed. “Somehow, the situation became more conducive for me to write. The muses were so supportive and they were there to inspire me to write.”The situation also allowed for some introspection. “As a person, learning how to endure the situation was a challenge. It changed our way of life. And the only way to survive is to have discipline and to always take care of yourself, “ he said, adding that the pandemic has made him realize how “fragile we are.”But being with my family 24/7 for 10 months was a big help. I learned to value it even more,” he said.

For this year, both Noel and Mitch are keeping the faith and staying optimistic—but cautiously so. “I hope to release the other songs I have written, so I can have a full album by mid-2021,” Noel said. “I hope our sector can bounce back, little by little, and bring back our livelihood. I hope the live scene opens again.”“It’s difficult to plan and make goals at present. And that’s maddening for me, because I’m such an order-and-control person,” Mitch said. “But I ache for all live performers who don’t know what the next 24 hours will bring. I can only pray that someday, we can return to doing what we know best—inspiring and entertaining others.” INQ