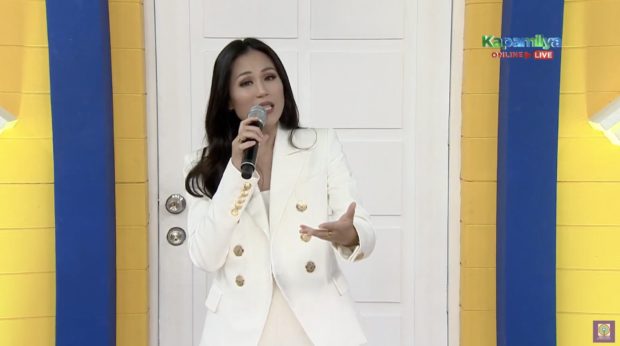 Toni Gonzaga has spoken up after a “Pinoy Big Brother” contestant drew flak when he admitted to supporting the ABS-CBN shutdown.

Laurente, 19, along with housemate Crismar Menchavez, 19, opened up to Big Brother last Saturday, Jan. 2, about their stance on the ABS-CBN shutdown. Both expressed regret and apologized to Big Brother.

Following his eviction, Toni Gonzaga took to Instagram yesterday, Jan. 3, to talk about the criticism Laurente face. “Forgiveness is a gift everyone deserves,” she said.

“For our 2nd eviction night housemate Russu was evicted because of a mistake he did that eventually made him realize the damage it has done,” she said. “People are very quick to judge him, call him names and crucify him on social media because of it without realizing that at 19 years old, he doesn’t know the gravity of words spoken.”

“He has learned his lesson and this will help him grow and mature in life. And now that he knows better, [he] will do better,” she added.

Gonzaga said that a person should not be defined by the “mistakes they’ve committed but from how they rise up.”

She also shared that she and Laurente hugged and that he kept apologizing to her.

The actress and host herself has faced criticism for being a supporter of President Rodrigo Duterte, who has made threats to shut down the network. Gonzaga and her sister Alex Gonzaga were among the celebrities invited to Malacañang for a dinner with Duterte in 2019, and she said they might have been invited because of their closeness to actor Robin Padilla, a staunch supporter of the president.

Russu on why he supported ABS-CBN shutdown

After ABS-CBN’s franchise lapsed in May, the media giant went off-air. Programs were axed and employees faced retrenchment. Congress voted against renewing the franchise in July.

Prior to entering “PBB,” Laurente was vocal on social media about being for the ABS-CBN shutdown. During his stay in the show, he told a housemate that he had been swayed by his friends on social media.

(I said yes to the ABS-CBN shutdown because you know how social media has such a huge influence. And all my friends on social media are from Mindanao and you know that when you are in Mindanao, you will really support… you know. The one who shut down ABS. I was influenced and I only knew their side.)

While speaking to Big Brother, he spoke of what made him change his mind.

(When I did not know the backstory and when I did not see how sad my actor friends were, I joined in the anger of netizens [against ABS-CBN].)

(When I felt what was going on inside ABS-CBN, or with the workers of [ABS-CBN], I realized I was wrong.)

Laurente is the second housemate to be evicted after Justin Dizon, who was controversial for mocking Jie-Ann Armero over her hygiene habits. JB