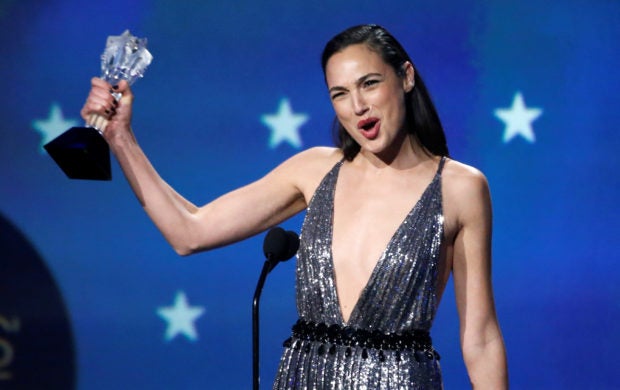 LOS ANGELES — “Wonder Woman 1984” used its lasso of truth to rope in $5.5 million over the New Year’s holiday. The sequel also ensnared another $10.1 million from overseas markets, bringing its global total to $118.5 million.

That’s not a disastrous figure given how much coronavirus has upended the movie business, but it does represent a steep 67% drop domestically and is a far cry from the grosses of pre-pandemic blockbusters. Stateside, “Wonder Woman 1984” has earned $28.5 million.

The superhero sequel, which is currently getting some social media backlash for not rising to the level of its beloved predecessor, is being simultaneously released on HBO Max in a bid to bolster the WarnerMedia streaming service and as a concession to a global health crisis that’s left the theatrical distribution landscape severely diminished.

The company has issued some vague numbers touting “Wonder Woman 1984’s” popularity on HBO Max, but little in the way of hard data. It did announce that Gal Gadot and director Patty Jenkins will reunite for a third film in the franchise, a sign that it believes the Amazonian warrior is a vital part of its plans for growing its DC cinematic universe.

Beyond “Wonder Woman 1984,” Universal and Dreamworks Animation’s “The Croods: A New Age” pulled in $2.2 million in its sixth week of release. That pushes the animated sequel’s domestic haul to $34.5 million and its global total to just under $115 million.

The film is being released due to a pact between the studio and major exhibitors such as AMC and Cinemark by which the movies can get released premium video on-demand with two weeks of their theatrical debuts.

In return, struggling theater chains get a cut of the digital revenues. Universal also released “News of the World,” a western that reunites Tom Hanks with his “Captain Philips” director Paul Greengrass.

The film grossed $1.7 million, pushing its domestic total to $5.4 million. Netflix bought the international rights to the movie this winter. Hanks stars as a Civil War vet who must return a young girl who was captured by natives to her remaining family.

Lionsgate’s “Fatale,” a psychological thriller with Hilary Swank and Michael Ealy, grossed $700,000 in its third weekend of release. That brings its total to $3.1 million.

Focus’ “Promising Young Woman,” which like “News of the World” and “The Croods” sequel is part of its parent studio Universal’s deal with exhibitors, picked up $660,000 in its second weekend. Its domestic total now stands at $1.9 million. “Promising Young Woman” has scored a great deal of buzz for its provocative look at sexual violence and revenge, and has earned awards chatter for star Carey Mulligan’s performance.

Disney and Pixar’s “Soul” has been streaming on Disney Plus over the holidays, but it has been made available in theaters in overseas markets such as China, Saudi Arabia and Thailand. The animated story of a middle school music teacher whose soul gets separated from his body grossed $16.5 million in its second weekend of release. That pushes its total to $32.5 million.

Read Next
MMFF: An apt testing ground for local video service Upstream PH
EDITORS' PICK
Tired of your Wi-Fi signal problems at home? Here’s a solution!
POVA x Mobile Legends Bang Bang: A partnership that’s built to win
Infants bundled off; no one hurt in PGH fire
OPINION: Mischief Reef – where it all started
Must-know scams to avoid when buying cars
Fire-damaged PGH calls for donations
MOST READ
Leonen impeachment case moves forward in House
Hot, humid weather for PH on Monday — Pagasa
Mischief Reef – where it all started
Woman believed to be dead wakes up minutes before her cremation
Don't miss out on the latest news and information.