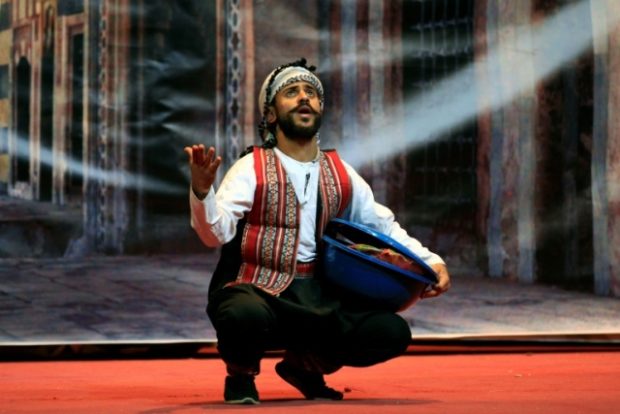 Hoping to provide entertainment to the people of embattled Sanaa, a troupe of struggling artists performed in the Yemeni capital a play called ‘Yemeni Film’, which showcased the country’s hardships. Image: AFP/MOHAMMED HUWAIS.

Yemeni men, women and children filled a hall earlier this month in rebel-held Sanaa, laughing and clapping as actors took to the stage with comic relief for their war-wracked country.

Yemen’s conflict has sparked the world’s worst humanitarian crisis, the United Nations said, and the Arab world’s poorest country has also been hit hard by the novel coronavirus.

Hoping to provide entertainment to the embattled population, a troupe of struggling artists performed in the capital Sanaa a play called “Yemeni Film,” which showcased the country’s hardships.

It revolved around young people who want to produce a film but face a mountain of challenges, including violence, air strikes, a lack of funding and a shortage of trained actors.

In an effort to avoid the minefields of political sensitivities and any backlash, the actors turned to comedy to paint a picture of their ordeal.

For the dozens of men, women and children who packed a Sanaa cultural center, it was a welcome respite from their daily struggles.

They cheered, whistled and laughed openly, as they sat side by side with no face masks, despite coronavirus dangers.

“We, as struggling artists, cannot provide food aid or stop the ongoing conflict,” Mohammed Khaled, the director of the play, told AFP. “All we can do is offer the people entertainment to take them out of their current situation and an artistic message that they can enjoy.”

Tens of thousands of people, mostly civilians, have been killed and millions displaced in the Yemen war, which erupted after the Iran-backed Huthis took control of Sanaa in 2014.

The conflict has deepened since 2015, when a Saudi-led coalition intervened to support the government against the rebels.

After five years of war, malnutrition has reached record levels and pushed the country further to the brink of famine, the United Nations World Food Programme warned in early December.

Despite a UN-brokered agreement reached two years ago between the warring parties, a peaceful settlement has yet to materialize.

The conflict affected everyone and everything in Yemen, said Khaled, and the art scene is no exception.

“This play talks about me, and all the artists and filmmakers in Yemen who are struggling,” he said.

Before the war, Yemen had a small but budding film and theater industry but there were only a handful of makeshift cinemas that showed old films, while often cultural centers or schools provided the backdrop for plays that spoke of politics or significant moments in Yemeni history.

Over the years, some films produced by Yemenis grabbed headlines.

“Karama Has No Walls,” a documentary short by Sara Ishaq, was an Oscar-nominated movie in 2014 that told the story of 2011 protests in Sanaa.

The documentary “I am Nojoom, Age 10 and Divorced” — the real story of a child bride — was submitted for consideration at the 2017 Academy Awards but not selected.

The 2018 drama “10 Days Before the Wedding” that told the story of a couple trying to tie the knot during the war was selected as Yemen’s entry for Best Foreign Language Film the following year, but it was not nominated.

“The biggest problem that we face is that there are no movie theaters,” said Khaled.

Today, filmmakers produce their work but “upload it online only,” he said.

“There is no financial return and this undermines (our) ability to sustain the industry.”

A ‘Yemen that we miss’

But these are not the only challenges.

Huthi authorities that control Sanaa, whose Old City is one of Yemen’s four UNESCO World Heritage sites, have imposed strict rules on dress, gender segregation and entertainment in the capital.

Although Yemeni society has always been conservative, it has traditionally allowed space for personal freedom and for cultural events, including concerts.

Actor Ahmad Hilmy hopes that such activities will return to Sanaa.

“We actors and filmmakers suffer a lot because there is no infrastructure for the film and theater industry,” he said.

Sanaa resident Ayash Subai said cultural activities should be used to deflect from usual headlines that only depict Yemen as a war zone.

“This is what we young people in the country miss. These activities convey the beautiful and positive image of Yemen that we miss,” he said.

To make up for it, Subai said, young people follow the work of Yemeni artists online.

“But this is not enough,” he added. CC