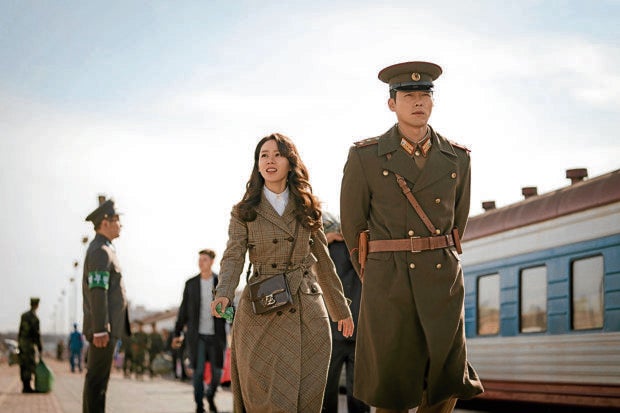 Filipino fans of the hugely popular Korean drama “Crash Landing on You (CLOY)” woke up to a new year with delightful news that its two lead stars are dating.

Soompi, a news site devoted to the K-pop and K-drama scene, reported on Friday a confirmation of the long-held rumor that the on-screen romance of actors Hyun Bin and Son Ye-jin had also blossomed off-screen.

With a two-month run that began in December 2019, “CLOY” became a big hit as fans swooned over the story about South Korean heiress Yoon Se-ri (Son), who accidentally paraglided into North Korea but was able to escape with the help of North Korean Army Captain Ri (Hyun Bin).

Soompi, along with other Korean entertainment news outlets, quoted the talent agencies of the celebrity couple—who go by the showbiz moniker “Binjin”—as saying that the pair began dating after the drama series ended in February last year.

Hyun Bin’s agency, Vast Entertainment, said that “after the end of the drama, their positive feelings toward one another developed into a romantic relationship.”

“We ask that you look warmly upon their relationship and cheer them on in the future,” it said.

Son’s handler, MS Team Entertainment, said the pair got to know each other through their acting projects and, after the end of [“CLOY”], they developed an interest in each other and ended up dating.

Soompi also quoted a report from Korean news site Dispatch that the actors met several times to hang out with fellow “CLOY” actors and realized they were “suited” as a couple. “They also reportedly bonded over their mutual love of golf,” it said.

Son and Hyun Bin first worked together in the 2018 movie “The Negotiation.”

Hours after the news broke, Son took to Instagram to talk about her relationship with Hyun Bin, with her post drawing close to 1 million “likes” as of this writing.

“I’m not sure what I should say, but I thought I should at least say something to all of you … It feels awkward and strange. I’m thankful to have been able to meet a good person, and I’ll work hard to tend [the relationship] with care … ,’’ Son said in her Instagram account, @yejinhand, where she posted a picture of a basket of flowers to go with her message to followers.

As of Friday afternoon, “CLOY” and Hyun Bin continued to trend on Twitter.

A netizen named Sheh said the couple “deserve all the happiness in the world.”

Another looked forward to seeing Binjin tying the knot soon. Others hoped that the relationship would truly be for good, recalling how another Korean celebrity couple—Song Hye-kyo and Song Joong-ki of “Descendants of the Sun” fame—got married in 2017 but split up after 20 months and eventually got divorced.

“CLOY” became such a smash hit among Filipinos that even Sen. Francis Pangilinan, who counts himself as a fan along with his celebrity wife, Sharon Cuneta, earlier posted spoof memes of himself and the mega star posing as Captain Ri and Yoon. Pangilinan told the Inquirer that Binjin would surely gain more fans now that they were a couple in real life.

Another follower, former Sen. JV Ejercito, on Friday remarked: “From reel to real, that will certainly make millions of ‘CLOY’ fans happy.”