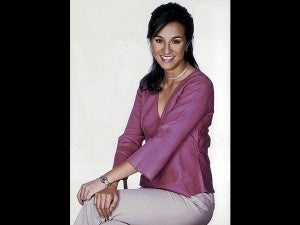 JAWORSKI. Imbues program with her strong “credentials” as a developer and supporter of juvenile talents.

THE NEW kiddie tilt, “I Shine Talent Camp,” has a major asset in its host, Mikee Cojuangco-Jaworski, so it should be congratulated for having gotten her to agree to be a part of its production team.

Mikee isn’t seen on TV as often as she should be, but she more than makes up for it by imbuing her new program with her strong “credentials” as a developer and supporter of juvenile talents who knows how they should be most equitable and effectively handled.

That’s because, aside from being a caring and loving mother, Mikee is also the spokesperson of the AnakTV Foundation, which is doing the key job of promoting truly child-friendly television, not just in the Philippines but throughout Southeast Asia.

In that unique capacity, Mikee understands better than most celebrities how important it is to give child talents the enlightened rather than exploitative training they need to become good, creative and responsible performers.

Mikee’s key advantage is clear in the simple yet focused way that she interacts with the child talents (and parents) on her show. We trust that, following her enlightened lead, the other members of the production staff will do work that is similarly committed and informed.

We say “will,” because that isn’t the case—yet. For instance, last Sunday, the show’s mentors taught their little wards how to dance simply by going the standard “imitation” route. As a result, when the kids were made to do their solo dance turns, they did poorly.

Teaching kids how to become truly outstanding performers is much more challenging than resorting to the facile, “gaya-gaya” technique. Beyond just teaching them specific steps and moves, the child talents have to be encouraged to understand why they’re performing in the first place, the effect that their performance ought to have on viewers, and what of themselves they can invest in their performance to make it truly, uniquely their own.

Clearly, a lot of work needs to be done in this regard, so the choice of real  mentors, rather than “celebrities,” is of the greatest importance. The mentors have to understand the entire process—and render it understandable to their young wards—and that’s a really tall order.

At the end of last week’s show, we were informed that the next mini-workshop would be on “program hosting”—and we got even more worried. How will the kids be trained to become good TV hosts in only one session? Will they be taught to merely read their spiels in a “lively,” “sassy” manner, as most pint-sized TV talents do these days?

If so, they will be missing the point in a big way, and the show will be producing, not outstanding little hosts, but more of the ho-hum and knee-jerk same.

We trust that Mikee will do what she can to help her colleagues see the light in this regard, so that “I Shine Talent Camp” can emerge as a genuine training ground for new child stars.

It would also be really great if the show could stop focusing on the young talents’ parents, because they aren’t what the show should be about!

Read Next
Practice makes perfect
EDITORS' PICK
vivo brings to the Philippines a powerful smartphone with a slimmer body, the vivo Y02s for only PHP 6,499
Apple warns of flaw that lets hackers into iPhones, Macs
46% of schools nationwide to have full face-to-face classes on Aug. 22
House energy committee chair Arroyo bats for cheap electricity
What to watch out for when selecting a video surveillance solution
Heads may roll at BOC, says Palace if sugar smugglers are allowed to use recycled import permits
MOST READ
DepEd to give teachers P5K cash allowance within first week of classes
LOOK: Miel Pangilinan dazzles in glittery pre-debut shoot
Man abducted in Batangas gasoline station, found dead in Quezon
Dressing the dead: Indonesian villagers clean corpses in afterlife ritual
Don't miss out on the latest news and information.