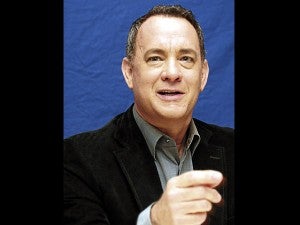 HANKS. “There’s no substitute for honesty.”

The actor, clearly enjoying his first grandchild, exulted, “There’s nothing I’d rather be doing than having that little kid on my knee or in my arms, and I’m saying things like (in an exaggerated, playful voice), ‘Who’s that little girl?’ or ‘Such a big yawn for such a little girl!’”

Olivia Jane is the daughter of Colin Hanks (Tom’s actor-son with first wife Samantha Lewes) and Samantha Bryant. “I had no voice in the discussion,” Tom kidded about his son and daughter-in-law. “They didn’t ask me. They just did the deed, and out popped my granddaughter!”

The talk about Tom’s granddaughter led to updates about his children, Colin and Elizabeth. “Colin is appearing in the next season of ‘Dexter,’ which is a great show,” he said. “He has a great gig, and he’s a great actor. My daughter, Elizabeth, is going to be delivering a book manuscript to Random House. She’s been working on it  since she got out of Vassar.”

He politely declined to chat about Chester and Truman, his offspring with wife, actress Rita Wilson, because they are too young to be “dragged into the public eye.”

Tom Hanks is back on the director’s chair with “Larry Crowne,” a comedy-drama about a middle-aged guy who reinvents himself by going back to college after he was laid off from work. It’s only his second directorial work after “That Thing You Do!” Tom also stars with Julia Roberts (who plays a college professor) in the movie he cowrote with “My Big Fat Greek Wedding” actress, Nia Vardalos.

“Does Larry Crowne have anything in common with me other than the hair and the big ass?” Tom asked aloud. “Did I say big ass? What I was going for was a guy who has a sensibility that says, ‘I have defined myself by my choices, and by the work that I’ve done.’ Lo and behold, he has to completely reinvent himself not because of some midlife crisis, but more of a midlife disaster.”

Asked if he has experienced in real life a scene where Larry is driving home, sad about losing his job, Tom answered, “I’ve had plenty of drives where I wondered, ‘What the hell is going to happen now?” There was one period in Los Angeles when I wondered if I was going to lose everything. My TV show had been canceled. Some alliances I had made petered out. I was looking at a long year ahead of me, in which there was no work on the horizon. The phone wasn’t ringing. I had two kids, and one was brand new. I didn’t know if I would be able to keep my house in Studio City.”

While the movie’s story is set in contemporary times, it was inspired by Tom’s experience in education in the ’70s. “I went to junior college in Hayward, California, because I had nothing else to do,” he recalled. “I didn’t have the grades to get into a university, and I didn’t have any skills to join the workplace.

“Junior college was essentially a big community and a commuter school,” he explained. “People from all over would come in. There were no dorms nor fraternities; just people who went to school. I went with a lot of people who were my age, just out of high school. But, there were also people who were twice my age. There were mothers whose children had grown up, were out of the house, and were going back to school. There were guys who were divorced, and a lot of servicemen who were back from Vietnam.

“They were starting all over again, so it was common to walk into a class and be in the same exact track or place in the education zeitgeist as people who were 30, 40, even 50 years older than me,” he added. “That always stuck with me in the early discussions I had with Nia.”

When one of the most decent guys in Hollywood was asked what his flaws were, Tom said, “I do not focus on myself.” Then, he reverted to humor: “I try not to look in the mirror any longer than to see the unsightly blemishes, and then run away.” Pointing at various parts of his face, Tom cracked, “I got one blemish right here, and I got another one here. My nose is kind of bulbous on this side of my face.”

Often described as the Jimmy Stewart of his generation, Tom was prodded to talk about what he dislikes in people. He replied, “In this life and in the way you govern yourself, and what you seek in those you make alliances with, there’s no substitution for absolute honesty. There are people who lie very easily. They don’t think about it and say, ‘Well, this is all part of living. You’ve got to accept the lie.’ I refuse to accept that. If you lie to me, you’re in big trouble! By and large, I’m a good-natured man. I give everybody a fair shake, but if someone takes advantage of that good nature, then you’re going to suffer the wrath of a lover scorned.

“I’m not a lightweight,” he emphasized. “I’m not a sucker. Hey, I’m not a pussy, I’ll tell you right there. And, I don’t mean that in a sexist sense.

“That might be one of the reasons why we’re still pretty good after 23 years,” he said of Rita being an evolving artist. The actress was just appointed editor-at-large of a new site, Huff/Post 40, by the AOL Huffington Post Media Group.

“We are artists in different ways,” Tom said. “We’ve always been. We met while making a film, so we know that it is not a living but a life that we have, because there are all these other intangibles that go with it.

“Look, I’m not stupid. I’m not going to walk away from somebody as great as my wife. We’ve never had big powwows about this. We give each other  support for whatever the other wants to pursue.”

He downplayed all the to-do about his enduring marriage, saying, “But, many of our friends have been married for a long time, too. It’s absolutely hard to stay married anywhere—but, part of it is, marry the right person and it might work out!”