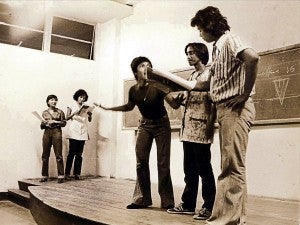 IT WAS theater directors, Anton Juan and Tony Mabesa, who first alerted me to a raw but distinctive talent: Rene Requiestas.

Rene was polite when he was introduced to me—but, immediately, I sensed a pilyo (naughty) streak in him.  He reached out and tried to please, obviously aware of the crowd’s reactions—a sign of a good performer.

He was cast as a Chabacano-speaking comedian in my production of the zarzuela, “Paglipas Ng Dilim.”

Rene was skinny, with rather distinctive looks.  His large, saucer eyes had a sad expression, similar to Joe E. Brown’s. He was very skinny and sported a wisp of a moustache. He would daringly take off his dentures for greater comic effect.

He also spoke in a guttural manner, like many jeepney drivers.  He had perfect timing. And, he loved the audience as much as they loved him!

Ishmael Bernal cast him in his films and recommended him to Marilou Diaz-Abaya, who hired him as a regular on “Sic O’Clock News.”

Thereafter, Joey de Leon cast him as his scene-stealing sidekick. Then, Viva very wisely cast Rene opposite Kris Aquino in a series of films, in which it was obvious that he was as poor as she was rich.  This contrast pleased moviegoers.

Rene smoked and drank too much.  As he got more successful, there were snide accusations that fame had gone to his head. But, he remained respectful to his former mentors.