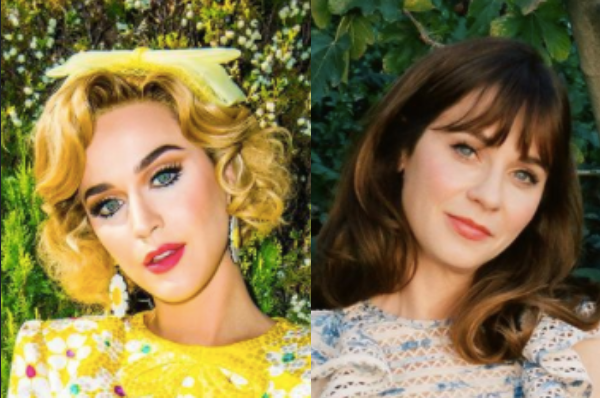 Katy Perry admitted to Zooey Deschanel that she used to pretend to be the actress in the past to get into clubs.

Perry made the revelation during an Instagram Live with Deschanel herself on Dec. 22 (Dec. 21 in the United States) to talk about Perry’s music video for “Not the End of the World,” which dropped on YouTube on Monday, Dec. 21.

Deschanel stars in the music video as herself, who gets mistaken for Perry and is abducted by aliens. As per Perry, she approached Deschanel around two to three months ago, just after Perry gave birth to baby Daisy, due to clamor from fans for a music video of “Not the End of the World.” At the time, Perry was on maternal leave.

“I called you up and I had this idea that Zooey would step in while I was taking a little bit of a leave. Obviously being a mother of two, you know exactly how it feels, and I was, like, ‘What a great chance,’” Perry told Deschanel on Instagram Live. “Because for so long, we’ve had this funny relationship — friendship — but obviously people think we look alike, right?”

Deschanel agreed, which prompted Perry to admit to her that she would pose as Deschanel when she first moved to Los Angeles around 18 years ago.

Deschanel, amused, told Perry she knew about this since people would tell her they’ve seen her around despite her being a “goody two-shoes.”

“People kept going, ‘I saw you out, I made eye contact with you,’” Deschanel said. “And I was like ‘No!’ and everybody kept telling me about this girl, ‘Katy, Katy who looks just like you’ and I’m like, ‘Who is this Katy?’ and then when I met you, I was so relieved ‘cause you’re so pretty and I was like oh thank God, she’s so pretty.”

Laughing, Perry shared that she used to be a wild child when she moved to Los Angeles at 17 years old. Nevertheless, she apologized to Deschanel for misrepresenting her.