An EP, a book and some paints: Ringo Starr’s long and winding self-quarantine 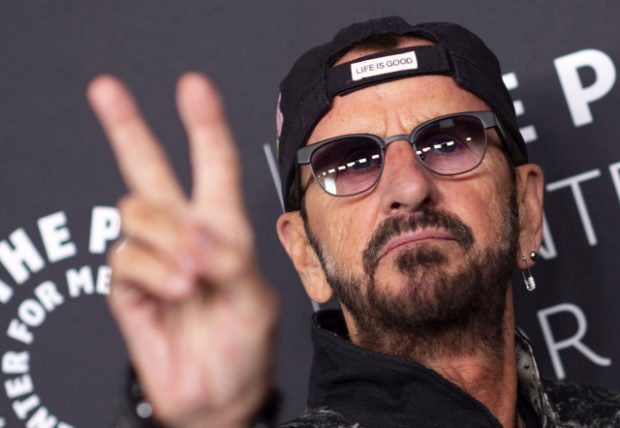 He kept the beat for one of the world’s most iconic bands, has fronted his supergroup for three decades, is a two-time rock ‘n’ roll Hall of Famer and at 80, Ringo Starr is as energetic as ever.

The pandemic has stalled his normally packed touring schedule, but the former Beatle is set to release a quarantine-developed EP as well as a photo memoir about his All Starr Band, which comes out Wednesday.

In 1989, fresh out of rehab, Starr started the band, one of history’s longest running live touring groups that has featured a wide array of music luminaries.

“I had recently cleaned up my act, but now I needed to find some way to get that act back out on the road,” Starr said.

“In those days, you had those little phone books that were so civilized, and I just started calling people,” the drummer and vocalist told AFP in an interview. “It worked out great.”

“Ringo Rocks: 30 Years of the All Stars” — which is being sold exclusively by Julien’s Auctions — chronicles the ever-shifting band’s history through rare photos and anecdotes from Starr.

“How far out,” the artist said from Los Angeles via video chat. “Thirty years… I didn’t sit there and say ‘Oh man, I could do this for 30 years.’ And it would’ve been 31 if we didn’t have this pandemic!”

Starr had two 2020 tours booked that were grounded by the health crisis, and his annual birthday bash had to go virtual.

“I would sit there some days and think, ‘Oh I want to go out! I want to hug people!’ Well, the result of that could be you die. So I didn’t do that either.”

Instead, the octogenarian crafted a four-track EP — “I loved EPs when I was a lad,” he said — at his home studio between April and October this year.

The mini-album entitled “Zoom In” — “which I thought was appropriate for this day and age; that’s all we do!” — features collaborations with a laundry list of top artists.

Its single “Here’s To The Nights,” out Wednesday in conjunction with the photo memoir, was penned by songwriter Diane Warren and features a who’s who of music including Walsh, Dave Grohl, Sheryl Crow, Lenny Kravitz, and none other than Paul McCartney.

“If he’s in town and I’m making a record, I always save a track if I know he’s coming in,” Starr said of his former bandmate. “He’s just an incredible bass player and a beautiful human being.”

The musician called the Dec. 8 anniversary of John Lennon’s death “a moment of reflection,” saying that as an only child, “I’m blessed… I was in a band.”

“I have three brothers who were very close.”

“It’s one of those moments,” he said of the 40th anniversary of Lennon’s shooting, also noting the poignancy that arrives every year on Nov. 29, the day George Harrison died in 2001.

In his well over half-a-century in the music business, one thing has stayed constant for the Liverpool-born, Los Angeles-based artist: he loves life in a band.

“I’ve always done everything I’ve done with other musicians,” Starr said. “When I started, a lot of people were starting, so we learned together, we jammed together, we made mistakes together.”

Not one for the flashy drum solos many other percussionists make their names with, Starr said he prefers to keep the rhythm for his bandmates.

“Some people have done really great solos, but it’s just something that didn’t appeal to me — even when I started, when you want to really show off,” he said.

“I just wanted to hold. It. Down,” he added, emphasizing each syllable.

“We were all very conscious of the fact that it’s mad out there, so we wore masks and stayed quite a bit apart,” he said.

“Sometimes it was only five feet, not six,” the Beatle known for his quips added with a wink.

“That kept me busy and also I like to paint, so I’ve got a little room where I can splash paints and it doesn’t bother anybody,” Starr said. “I’m finding things to keep me moving.”

As Ringo Starr turns 80, he talks about his life, Beatles journey, including that unfortunate Manila experience