As Ringo Starr turns 80, he talks about his life, Beatles journey, including that unfortunate Manila experience 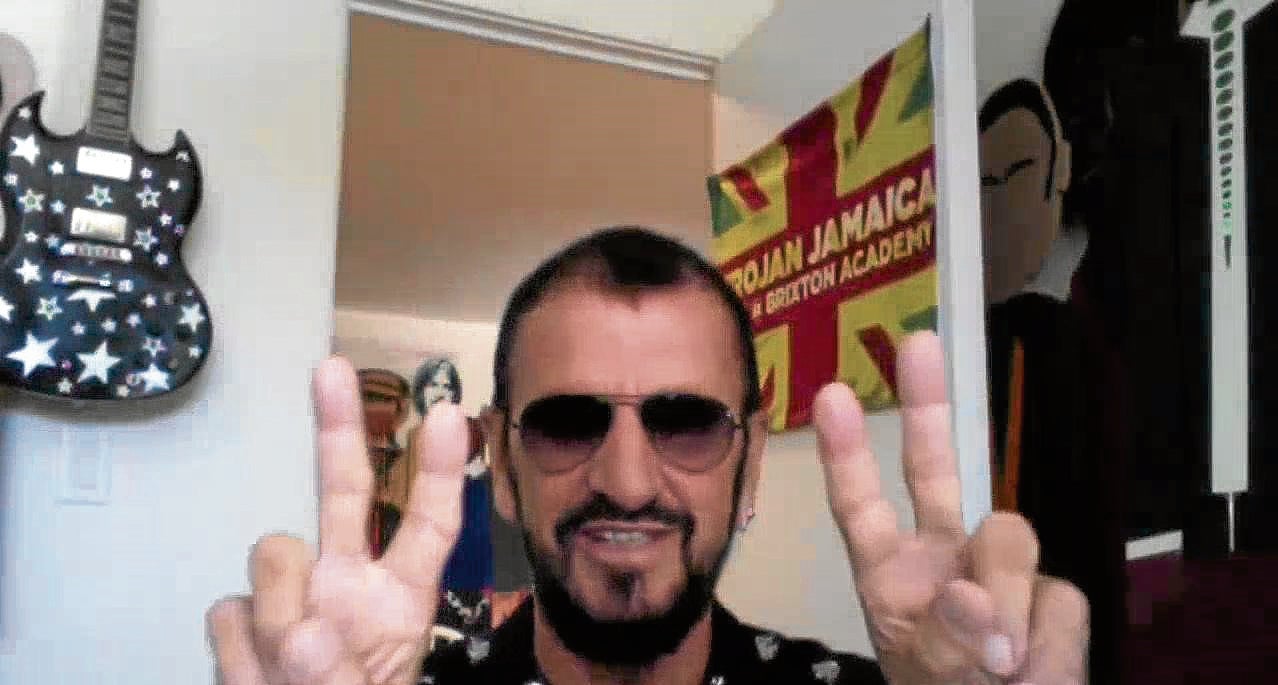 LOS ANGELES—As he turns 80 on July 7, Ringo Starr reflects on the major turning points in his life.

“If I’d have gone and lived in Houston because of Lightnin’ Hopkins, who knows where I would have been?” he asked aloud, referring to what would have happened if, at 19, he immigrated to the United States just to be where his country blues musician idol lived.

“And if I’d have stayed with Rory Storm and the Hurricanes, what would have happened there?” Ringo was with the band until he decided to join the Beatles to replace drummer Pete Best.

There was also the matter of Ringo being sickly as a child. He suffered from appendicitis, then a ruptured appendix, pleurisy, food allergies and tuberculosis. Lying in a hospital bed, the 13-year-old was given a little drum by a music teacher. In that instant, Ringo decided that it was the only thing he wanted to do in life—to be a drummer.

He ended up playing drums for the greatest band in rock history, alongside Paul McCartney, John Lennon and George Harrison. In this recent video call, the man who was considered the Beatles’ heart and soul suddenly showed up on my laptop screen, half an hour early. He thought the interview was at 11:30 in the morning. It was set at noon.

In the few minutes that he stayed and then promised to return at noon, the Beatle, who is known for his happy-go-lucky personality, was easygoing and charismatic as we engaged in small talk.

Behind him in a corner of his Los Angeles home were walls decorated with a black guitar with white stars, a flag emblazoned with Trojan Jamaica, the reggae label, and further behind, a wall with prints of faces, including what looked like George Harrison’s.

A few minutes before noon, Ringo appeared again on my screen, with the most disarming smile and giving us the peace sign. “Peace and love” is his mantra. He also wore a necklace with a peace sign pendant.

I asked right away a question to finally clear the matter about the Beatles’ unfortunate experience in Manila. In early July 1966, the band’s two concerts in one day were enthusiastically received by thousands of screaming fans. 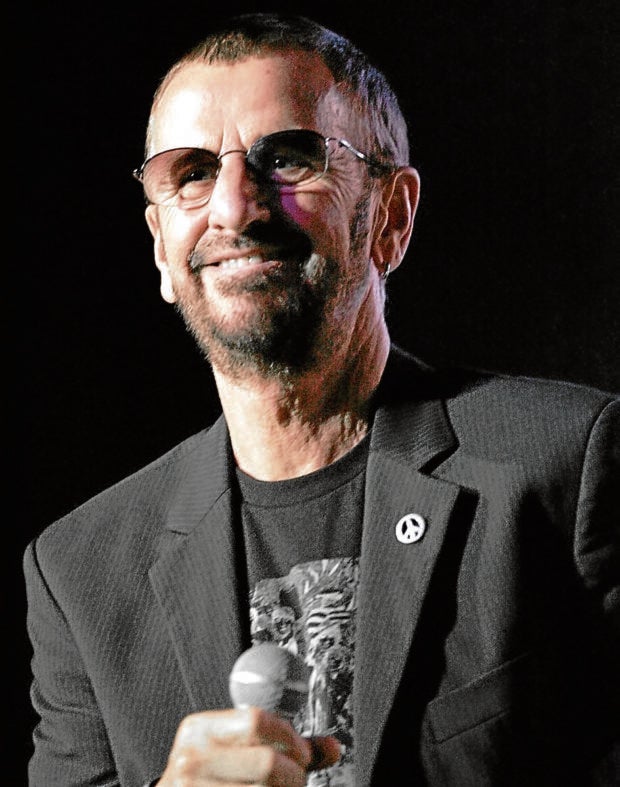 The concert promoter apparently did not tell the Beatles that he promised then First Lady Imelda Marcos that they would show up in a reception at the Malacañang Palace. The group refused to go to Imelda’s event.

In a piece dated Nov. 3, 2018, a PDI editorial looked back at that incident: “Claiming to be incensed at the way the Fab Four had ‘offended’ the sensibilities of the First Family, particularly Imelda Marcos and her children, when they allegedly snubbed an invitation to join the Marcoses and their friends at a get-together in Malacañang, ‘concerned citizens’ lined up all along the exit route of the world-famous band and inflicted physical punishment on them. The Beatles were kicked, pummeled, pushed, abused and cursed, chased to their plane seats and given indelible memories of Filipino hospitality.”

“Yeah, it was hell,” Ringo recalled. “We didn’t understand it. We came with 25 outriders getting us to the hotel. I was sharing a room with John (Lennon). We put the TV on in the morning and it was like, what the hell’s going on? They didn’t like us. They showed pictures of all the children. Someone with the TV camera going past these kids being miserable because we didn’t turn up.

“And we’ve told them. We are not turning up. Anyway, we left back to the airport with one motorbike and we did get pushed around. But we got on the plane and were off to the next round. We were young lads. We came, we played. That’s all we’re there for. There was a hassle. Though it didn’t mean we didn’t still love the people in the Philippines. It was just a couple of them we didn’t love (laughs). So that’s my story.”

Cutting to the present, Ringo was asked about the escalation of racial issues since the death of George Floyd. The Beatles were noted for refusing to play to segregated audiences.

“It is crazy again,” he agreed. “And we did refuse to play in Mississippi. All our heroes are from Ray Charles to Lightnin’ Hopkins. Stevie Wonder was one of them. The acts we loved were African-American. We said no, we play to people, people are people. That was a first for us and a first for them.

“This year has been such an eye-opener because of George Floyd. They killed him but the weeks after, all the parades in LA, all over America, and it went to England, France. It’s so huge now… We want change.”

Ringo smiled when the chat turned to meeting Yoko Ono for the first time. “I remember it well because I walked into the studio and Yoko was in bed,” Ringo began with a laugh. “We never had our wives (in the studio). My wife Maureen (Cox)—God rest her soul—in the eight years and all the studio time we did … she was there more than 45 minutes over all that time. They (wives) would come in, say hi and leave. Because we were working.

“I went and asked him (John), ‘What’s going on here? We’re in the studio and Yoko is here.’

“John said, ‘What we’re planning is to know exactly—what I’m doing, she’ll know and I’ll know what she’s doing. We will know each other.’ So I was fine after that … she’s a lot of fun.”

Ringo added about the woman who was controversial in the band’s lore. “I’ve never felt uncomfortable with her. I played on the Plastic Ono’s first records, John’s and hers. That’s what it’s about. We’re supporting each other. I saw her the summer before in New York. If I’m there, we say hi.”

As he clearly showed in his affable demeanor on our computer screen, Ringo is comfortable in being part of a band so popular and well-loved that it has sold a whopping 600 million worldwide. But even as early as the ’60s, as the Liverpudlian band began to rise, Ringo had to adjust to the new reality.

“In the beginning, we wanted to make good music and play to audiences, which we did,” said the man who also tried being a railway messenger, barman and engineering firm apprentice. “But we got so big that the price to pay was that you couldn’t go into a restaurant. It actually happened to me. I was eating a meal in a restaurant. I’ve got the fork into my mouth and some woman pushed it out and said, ‘Sign this.’ I said, ‘No, I’m having dinner.’ And she told me—this was like in ’67—‘You ruined your whole career (laughs).’”

And what was the strangest request he got from a female fan? With a laugh, he obliged with, “The weirdest ever was, ‘Have you got a light (laughs)?’ Like I’m going to get into that. Get off (laughs).”

In the never-ending journey of the legendary band, Peter Jackson came up with a new documentary, “The Beatles: Get Back,” which he created from footage captured by Michael Lindsay-Hoggs for a 1970 documentary on the group.

“We made the documentary (‘Let It Be’) a long time ago,” Ringo explained. “We did the last live show on the roof of the Apple (Corps Limited, a London corporation, not the company cofounded by Steve Jobs) building. We found 56 or 57 hours of unused footage. We asked Peter Jackson, could he help us here? It’s now 46 minutes long (in ‘The Beatles: Get Back’) and it’s incredible.

“So it’s a shame because it should have been out this year. We’re all in limbo, in a way.”

On how he is going to mark his big 80th milestone, Ringo shared, “I’m going to celebrate it a little differently than I have for the last 12 years, when we have the peace and love moment. Last year, we celebrated it in Nice. But we started in 2008 in Chicago.

“I’ve asked several of my friends to send me footage from a show they’ve done. I’m using some of mine from the All-Starr’s last year. I’ll be there introducing.”

He added, “Oh yeah, we have friends in the videos. One of them you might know well. Have a guess.”

Paul McCartney? “Ah, you got that one,” he quipped with a grin. The virtual charity concert will hit YouTube on July 7 to benefit Black Lives Matter Global Network and other worthy causes.

As for his plans beyond the big birthday, Ringo answered, “With the All-Starr, we do one tour a year. Now, I’m doing two tours a year.

“I have many blessings. My children are blessings. I’ve got eight grandkids now and a great grandson. I’m an only child and I look around the table and I go, what? All these people are related to me—that’s far out. And Barbara (actress Bach, his second wife) is in my life—that’s another blessing.

“I’m here, the road I’ve taken was made up of good choices and there were some other choices… And we’re in a great business because we don’t have to retire. And I plan to go on longer than 80.

“On July 7th is my birthday. I hope you’ll spread the word. Everybody goes, ‘Peace and love,’ wherever you are.”

Flashing the peace sign with his fingers, Ringo ended our chat with, “I love you, peace and love, remember on the 7th of July at noon.”