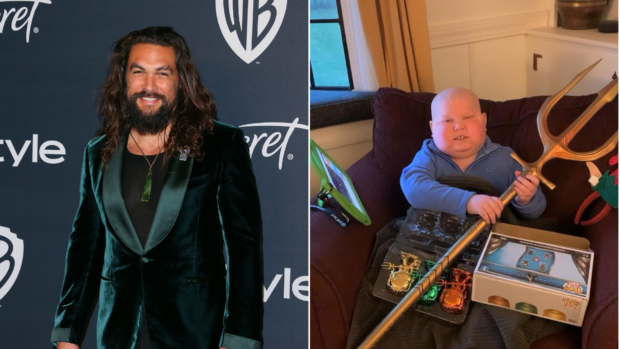 “Aquaman” star Jason Momoa surprised a young fan, who is battling brain cancer, with his own life-sized trident similar to the one in the film.

Momoa gave the trident to Danny Sheehan along with other “Aquaman” toys, as per his Instagram post yesterday, Dec. 7.

Sheehan is a 7-year-old boy with pineoblastoma, a rare form of brain cancer, Gulf News reported on the same day. He has been struggling with the critical illness since January 2017.

“Wanted to share a picture of this amazing boy Danny Sheehan, Natalie his mom sent me this today,” Momoa said alongside the images.

Among the photos was an adorable moment where Danny was on a hospital bed with an action figure of Momoa as Aquaman. Momoa had also included with the packages a note that said, “Can’t wait to ride on some dolphins with you Danny! Love, Uncle Aquaman.”

Momoa first reached out to Sheehan after a video of him receiving an Aquaman figure circulated online last month. Following Sheehan’s viral clip, Momoa had a video call with him and described him as a “beautiful boy.”

Momoa made his debut as Aquaman in the 2016 film “Batman v Superman: Dawn of Justice.” After starring in the “Aquaman” movie in 2018, he is set to appear in its upcoming sequel. Ryan Arcadio/JB