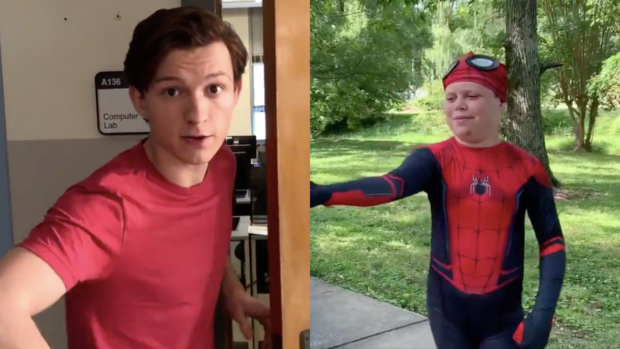 The actor’s heartwarming gesture was shared by a certain Jaimie Trueblood on Twitter last Sunday, Nov. 1. Trueblood posted a short video of Holland rushing through a school hallway to take a final exam.

“Oh hey Jerry. What’s up?” Holland says as he reaches a classroom door and faces the camera. Jerry is a patient at the Children’s Healthcare of Atlanta in Georgia, United States.

“Even a superhero has to do finals but do you mind filling in for me?” Holland asks before tossing a Spider-Man suit to the camera.

The video then cuts to Jerry who catches a Spider-Man outfit while assuring Holland that he can take his place. The video uses cinematic sound effects to make it appear like a trailer for an upcoming feature film as it shows Jerry in the Spider-Man suit.

The boy then proudly says “I got this” before shooting a string of web from his wrist. As the video ends, it shows a movie poster similar to the “Spider-Man” films. However, instead of Holland, it features Jerry hanging upside down from a string of web while donning the suit.

The fake movie is titled “Spider-Jerry: Close To Home,” which is a clever play on last year’s “Spider-Man: Far From Home” film.

While Trueblood only released the video recently, he told pop culture website The Direct on the same day that Holland shot his part when he was filming the 2017 movie “Spider-Man: Homecoming.” Trueblood’s friend, Dan McFadden, later filmed Jerry’s portion and worked with a professional advertising agency to create the fake movie poster. Ryan Arcadio/NVG