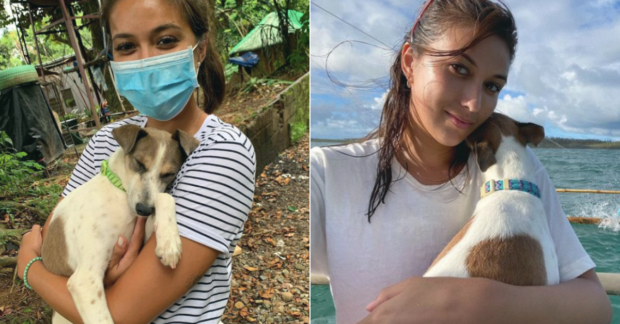 Peters, who was crowned Miss Universe Philippines in 2017, had been calling for blood donors for her dog Milo, whom she said was in critical condition in her Instagram Stories.

She met Milo after spending her birthday last October at the animal shelter Pawssion Project in Bulacan, which saves dogs in pounds from being euthanized. After falling in love with Milo, the dog became her “first rescue pup.”

She announced Milo’s passing today on Instagram, posting photos and videos of the adventures they had in their short time together.

Peters noted that in her loss, she was able to save a life. “I lost my little love this morning, but was in the right place at the right time to save a drowning surfer because I did a little paddle out for you.”

“Milo girl, I’m so sorry I wasn’t with you when you left the physical world but I hope you know I loved you more than words could describe.”

For Peters, the loss “hurts extra hard,” in part because she was not around when Milo died, and that she wanted to give her a “long, happy life” to compensate for the tough life she had.

Milo was pampered with Peters, traveling with the beauty queen by boat and plane. She even accompanied Peters to Camarines Sur for relief efforts.

Milo was among the dogs and cats on death row at the City of San Jose Del Monte pound last October. During Pawssion Project’s rescue operations, Milo was the first dog it got from the pound.

The animal welfare group was able to raise enough funds to cover the adoption fees of the 100 dogs on death row at the SJDM pound at the time. It advocates for no-kill pounds and for animal lovers to adopt dogs to keep them from being homeless. JB