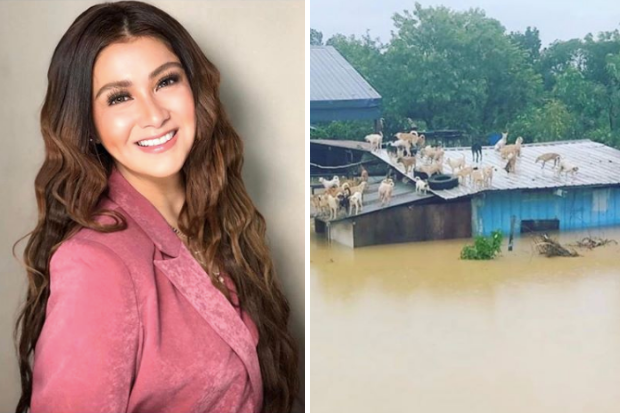 Carla Abellana and the dogs of the San Mateo pound in Rizal. Image: Instagram/@carlaangeline, @akfanimalrescue

Carla Abellana is calling for aid as many impounded animals have been left with no home after the onslaught of Typhoon Ulysses.

Abellana, a known animal welfare advocate, shared that the San Mateo pound in Rizal has been ravaged by floods, as seen on her Instagram post yesterday, Nov. 14.

“The San Mateo Pound has lost almost everything because of Ulysses. They are one of the very few Dog Pounds in our country with a No Kill Policy (they do not euthanize their impounded animals),” she lamented.

“[The Animal Kingdom Foundation] personally knows their personnel as they volunteer for AKF often. Now it’s them who need help,” Abellana added.

Abellana’s post came with several photos of the said dogs stranded on a rooftop and a photo of said ravaged dog pound.

“The AKF Team will be bringing [dog food] and other supplies to the San Mateo Dog Pound starting today. Everyone is also encouraged to help in any way,” she disclosed.

The pound is currently in need of the following:

Abellana emphasized that they are also in need of a volunteer vehicle to be used for transporting their dog food donations from Tarlac to San Mateo. Those interested in providing cash aid can check out the foundation’s several donation channels on its Facebook page.

AKF is currently on its second day of restoring the facility and taking care of the dogs, as seen on its Instagram page today, Nov. 15.

“The AKF Team arrived early this morning at San Mateo Pound to continue the clean up of the facility and checking of the animals. As of today, there is still plenty of work to do. Still waiting for the firetrucks to bring water supply,” the team stated on its latest update via Instagram earlier today.

The team said that 70 dogs survived the typhoon, although it was not disclosed how many dogs died.

As of noon today, the foundation is still looking for one more volunteer fire truck to help flush out the mud in the said San Mateo compound.

Several other celebrities have been working on various relief operations to aid victims of Typhoon Ulysses, which ravaged the country from the night of Nov. 11 to the morning of Nov. 12. It has been compared to 2009’s Typhoon Ondoy because of the devastation it has brought upon several parts of Luzon. JB