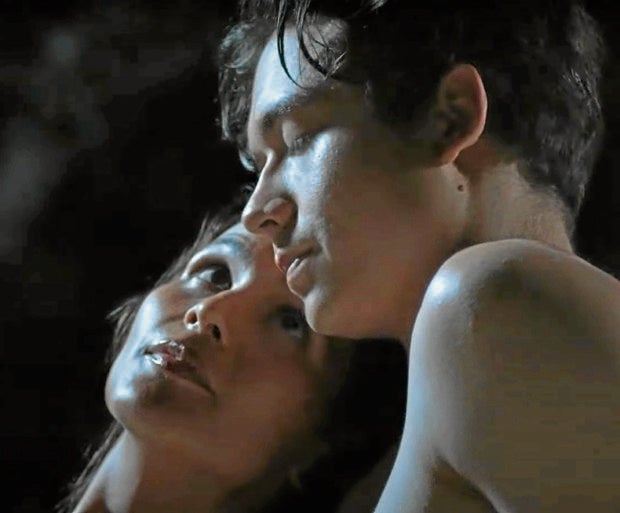 They’re the most intimate and most intense love scenes that I’ve done in my 18 years in the business,” declared actress Iza Calzado, who is currently promoting “Loving Emily,” her May-December love affair movie with Jameson Blake.

Iza admitted that while they were shooting the love scenes, she had tried to make Jameson feel comfortable by saying, “Don’t think you have to pull back because it’s me. Forget that. I give you free rein. Just do it.”

These love scenes were also a first for James, who has only been an actor for four years. “It’s challenging because we had to treat each other as lovers. I’m grateful that after a while, the emotion just flowed freely,” said James, who at 23 is 15 years younger than Iza.

Iza admitted: “While we were shooting, I kept thinking, ‘Oh my gosh! He’s so young. I have to help him because I’m more experienced.’ But eventually, ’di rin nagpatalo si Jameson. He was game!” Jameson confessed: “I felt uneasy at first because, in the TV programs that we did together (“A Love to Last” and “Ngayon at Kailanman”), I would look at her as a mother figure. For this, I was her lover.”

Iza said she enjoyed watching Richard Eyre’s “Notes to a Scandal” so much that she felt keen on doing something similar, “but I didn’t imagine it would come earlier. I was thinking that I’d do it in my 40s, but I was 36 when we shot this. Jameson and I call each other ‘baba’ ever since we worked together in ‘Ngayon at Kailanman.’ We would be teased to each other there, but I couldn’t see Jameson as a lover. I saw him as my baby boy. For me, it was just playtime at work, but it’s different when we’re actually doing the scenes.”

However, as an actress, Iza said it was part of her “job” to fall in love with Jameson’s character, Vince. “I had a tough time with that. I had to get seeing him as a little boy out of my head—I’m 15 years older than him. It helped that we had a sensuality workshop with Angeli Bayani.”

She further said: “It was tougher when we were on the set. To be honest, it’s easy to kiss on screen, but what’s more important for me was the emotion. I really had to feel so in love with this boy. What made this more challenging was that Emily is also a married woman here.”

What helped Iza actually become Emily was watching Timothee Chalamet’s performance in Luca Guadagnino’s “Call Me By Your Name.” She explained: “It’s also a May-December love affair but of the LGBTQ community. There I saw Timothee looking really boyish. I said, ‘I think this could work.’ I watched it with Jameson and after that, I was no longer nervous. I just hope the scenes turned out well.” When asked what he thought was the “acceptable” age difference between a couple, Jameson replied: “It really depends on both parties. What I learned from working on this film is that love is love, and age doesn’t really matter. What’s important is if you’re comfortable with each other and you make each other happy.” 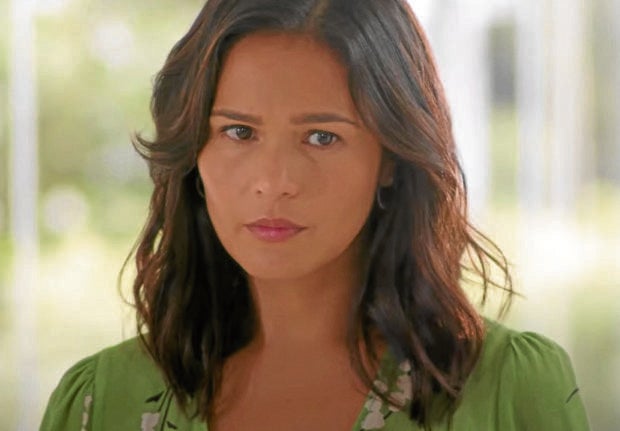 Iza agreed with Jameson and added: “When your souls connect at the right time, age becomes irrelevant in the same manner that gender is irrelevant for some. Love is love, just like what Jameson said. If you ask me, I can’t even entertain these kinds of thoughts now because I’m married (to British businessman Ben Wintle); but if I weren’t, would I be open to this? Maybe. I can’t say ‘never.’ That’s also what I’ve learned in life, to never say ‘never.’”

As to how she tried to break the ice with Jameson, Iza said it helped that they were already familiar with each other even before they started working on the film. “I always talk to my coworkers because I know I have to build chemistry with them. Chemistry is important since it’s what the audience will see. No ice had to be broken because with Jameson … we’ve been friends since ‘Ngayon at Kailanman.’”

She further said: “I must admit that we became closer after the shoot. We worked on this for 10 to 12 shooting days. We traveled to Tuguegarao to do that. It’s hard not to build a stronger relationship with another person in that span of time because we traveled together and shared intimate scenes.”

Meanwhile, Jameson admitted that he once dated a girl older than him when he was in high school. “But she was just two or three years older than me. I didn’t date anyone older than that,” he pointed out. “The difference is that before, I had this mindset that I should date girls older than me because they’re more mature. But as time passed by, I realized that age doesn’t really matter. It depends on the girl’s maturity. Some younger girls are mature for their age.”

He added that working on the film taught him that, “Anything is possible. If you’ve built that connection with someone and you feel it, I think that’s what matters the most.”