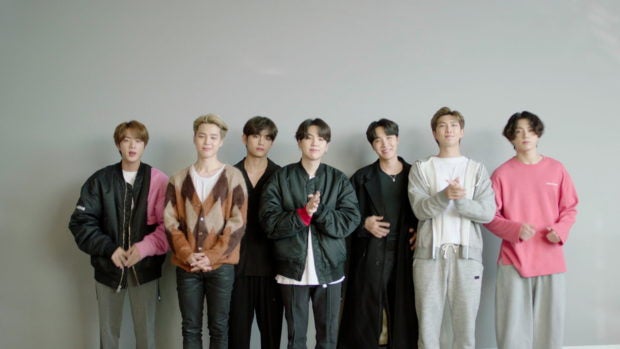 BTS accept the win for Best Group at the MTV EMA’s 2020, in Los Angeles, California, U.S. in this screengrab image released on November 8, 2020. Courtesy of MTV/via REUTERS.

K-pop stars BTS picked up four prizes at the MTV Europe Music Awards on Sunday, including best song for “Dynamite” and best group, capping a year in which the Korean band underlined its status as a major global act.

The seven-member band also snagged MTV awards for best virtual live act and the biggest fans, although the coronavirus pandemic meant there was no audience and no ceremony to mark their achievement.

Instead, the music channel created a virtual stadium full of waving and cheering fans for the event, with acts appearing in pre-recorded performances from wherever they were located and winners accepting awards to camera.

British band Little Mix hosted the show, without member Jesy Nelson who was reported to be ill. They appeared on a computer generated stage within the “stadium.”

In a nod to the pandemic, U.S. rapper Jack Harlow sang “Whats Poppin” on a stage with four dancers wearing face masks.

Little Mix, who performed “Sweet Melody” in a performance recorded in London, won the best pop act for 2020.

Among the performers was Alicia Keys who sang “Love Looks Better” and Sam Smith, who performed “Diamonds” on the stage of an empty theatre.

U.S. singer and rapper Doja Cat, who took home this year’s best new act award, opened the show with her hit “Say So”.

French DJ and producer David Guetta, who won the award for best electronic act, performed “Let’s Love” with British singer Raye at the Széchenyi Bath complex in the Hungarian capital Budapest, accompanied by a laser show.