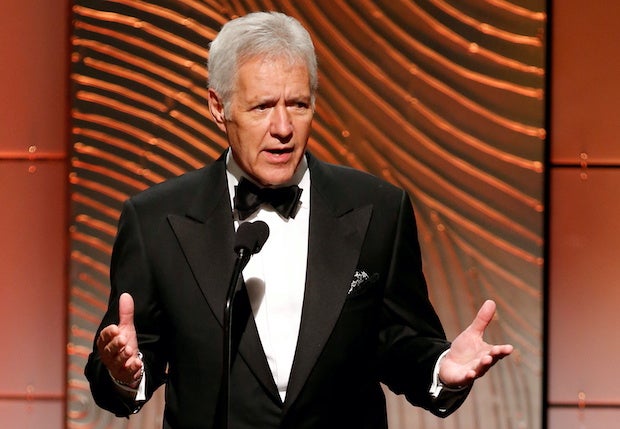 LOS ANGELES — Game show host Alex Trebek, who as the brainy quizmaster of “Jeopardy!” became one of the most recognizable personalities on American television, died on Sunday at the age of 80, the show said on its official Twitter account.

The Canadian-born Trebek said in a YouTube video in March 2019 that he had been diagnosed with Stage 4 pancreatic cancer, vowing to beat the disease despite the long odds.

Trebek told fans in August 2019 he had completed chemotherapy, but he disclosed the following month that he had to restart treatment because of a setback.

He passed away peacefully at home surrounded by family and friends, the show’s tweet said.

Twenty years after “Jeopardy!” first aired in 1964, Trebek became the face of the show and turned it into a ratings powerhouse.

“Jeopardy!” which requires contestants to display their knowledge of a broad range of trivia topics by providing their answers in the form of a question, has consistently drawn more than 20 million viewers a week in the United States and Canada, making it the most-watched quiz show in those markets.

Its ratings have risen even higher when contestants have racked up several weeks of consecutive wins.

“Here’s the belief that lies at the core of Alex’s TV persona: ‘Jeopardy!’ itself, not he, is the star of the show,” Ken Jennings, a former “Jeopardy!” contestant who holds the record for the longest winning streak on the show, said of Trebek in a 2019 column in the New York Times.

“It’s hard to imagine any modern TV personality deftly avoiding the spotlight like that,” Jennings added.

Trebek was known for engaging contestants with straight-faced but witty banter and for his scholarly demeanor and scrupulous pronunciation.

Jennings compared Trebek, who hosted more than 7,000 episodes of “Jeopardy!” with the late news anchor Walter Cronkite and talk-show host Johnny Carson because his nightly presence on television had become a “matter of ritual.”

Trebek won six Emmy Awards for outstanding game-show host, most recently in 2019, and also received a Lifetime Achievement Emmy in 2011. The Hollywood Reporter said in a 2014 article that Trebek was earning $10 million a year.

Trebek was born in the nickel-mining city of Sudbury, Ontario, the son of a Ukrainian immigrant father and a French-Canadian mother.

He earned a degree in philosophy at the University of Ottawa, beginning his career in broadcasting while still attending school.

After hosting a number of television shows in Canada during the 1960s, Trebek was encouraged to move to California in 1973 by the late actor Alan Thicke, a fellow Canadian, to host a short-lived NBC game show called “The Wizard of Odds.”

In the following years, Trebek hosted a few other shows with equally quirky names, such as “High Rollers” and “Battlestars.”

None of them became an enduring success but they bolstered Trebek’s reputation in Hollywood and eventually paved the way for his joining “Jeopardy!”

Television personality Merv Griffin, along with his wife, Julann, came up with the idea for “Jeopardy! in the 1960s.”

When Griffin revived “Jeopardy!” again after a hiatus of several years, producers chose Trebek to host it and Trebek also helped produce the show for his first three seasons.

One of the gigs that helped him secure the position was a temporary role on “Wheel of Fortune,” another game show Griffin had created, according to an interview Trebek gave in 2007.

Viewers became oddly attached to the mustache Trebek sported from early in his career until he shaved it off in 2001. It made headlines when he grew back the mustache in 2014.

Trebek is survived by his wife, Jean, and their two adult children, Emily and Matthew.