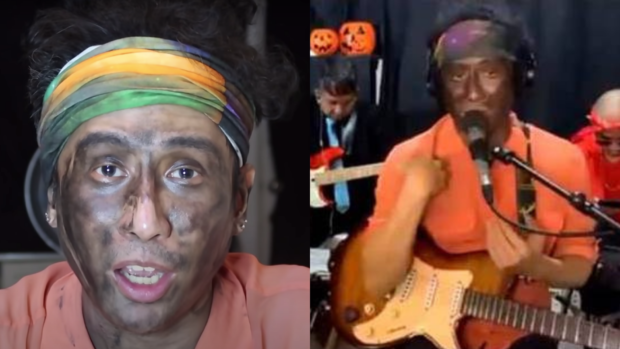 The group live-streamed the show on their Facebook page yesterday, Oct. 30, but has since taken it down. However, one user on Twitter with the handle @paz_ango posted a snippet of their performance on his own profile on the same day.

The short video shows Alcantara’s face covered in dark makeup to make him appear as a Black man. As their viewers began calling him out for his costume, the guitarist called the Black Lives Matter movement “kalokohan (nonsense).”

Black Lives Matter is an activist movement that campaigns against violence and racism toward Black people.

(Because you are singling out [Black lives]. Of course, our lives also matter. There should be no color.)

He also clarified that his opinion on the movement is solely his own and is not shared by his fellow band members.

Following their performance, actor Bart Guingona described MYMP as a “[consequence] of having an inadequate educational system that produces uncritical, unthinking, insensitive and very stupid Filipinos.”

#mymp is the consequece of having an inadequate educational system that produces uncritical, unthinking, insensitive and very stupid Filipinos

Meanwhile, a Twitter user (@idlewreker) claimed that Alcantara’s ignorance was the reason why the band’s former lead singer, Juris Fernandez, left the group. Many also shared memes that said the band was no longer popular after she left and that they should have just stayed that way.

imagine being this ignorant in 2020,, this why juris left the band@MYMP_OFFICIAL educate YOURSELF pls https://t.co/LvwskpTNpE

After the backlash, Alcantara defended his decision to use blackface in a video on his YouTube page. He stated that he was simply dressing up as the American musician Jimi Hendrix for Halloween and that the makeup was part of his costume.

He also insisted that wearing blackface makeup does not mean that he is anti-Black. Alcantara later described the Black Lives Matter as mere propaganda.

As he ended his video, Alcantara reminded his critics: “Don’t believe everything you hear or read. Not everything is as it seems. Don’t be swayed by what is popular opinion and cool.”

Blackface is known to have started in the 1830s and is considered to be the first uniquely American form of entertainment. In the performances, white men would darken their skin color to create caricatures of Black people.

Civil rights organizations condemned these performances from the start for dehumanizing Black people and “introducing and reinforcing racial stereotypes.”  /ra