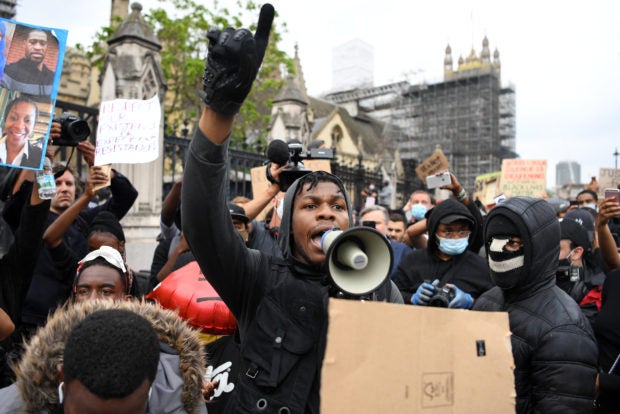 John Boyega speaks to protestors in Parliament square during an anti-racism demonstration in London, on June 3, 2020. Image: AFP/Daniel Leal-Olivias

“Black lives have always mattered,” the 28-year-old actor told the crowd at the peaceful demonstration. The Evening Standard posted a video of his speech on YouTube on the same day.

Fighting back tears, Boyega also urged his fellow protesters to understand how painful it is “to be reminded every day that your race means nothing.”

He then declared that this was “not the case anymore.” Boyega emphasized how he and the crowd are the “physical representation” of their support for Floyd and other black people who have died at the hands of law enforcement.

While Boyega’s speech was met with loud cheers from the crowd, he urged them to keep their protests “as peaceful and organized as possible.”  The actor then appealed to his fellow black men to take care of black women and “raise children in love.”

At one point, Boyega spoke about the possibility of losing his acting career, saying: “I’m speaking to you from my heart. Look, I don’t know if I’m going to have a career after this, but f*ck that.”

He also emphasized how the protest was “about innocent people who were halfway through their process.”

As he ended his speech, Boyega reminded the crowd that they do not “leave here and stop.”

“This is longevity,” he pointed out while stressing the importance of the individual power of each protester.

Following his speech, the “Star Wars” franchise and production company Lucasfilm expressed its support for Boyega.

“John Boyega, you are our hero,” the film company said on its Twiter page.

Meanwhile, filmmaker Matthew A. Cherry assured Boyega that he would work with the actor even after his emotional speech.

“I would work with John Boyega and I urge other Non-Black creators to affirm that they have his back as well,” he said.

I would work with John Boyega and I urge other Non-Black creators to affirm that they have his back as well. https://t.co/SqXgmIS5aR

Other Hollywood stars such as Jordan Peele, Lin-Manuel Miranda and his “Star Wars” co-actor Mark Hamill also expressed their support for Boyega.

Along with Boyega, other celebrities including Ariana Grande, Cole Sprouse and Halsey have joined Black Lives Matter protests in the United States. Protests and looting broke out across the US after Floyd died while in police custody in Minneapolis, Minnesota, on May 25. Ryan Arcadio /ra