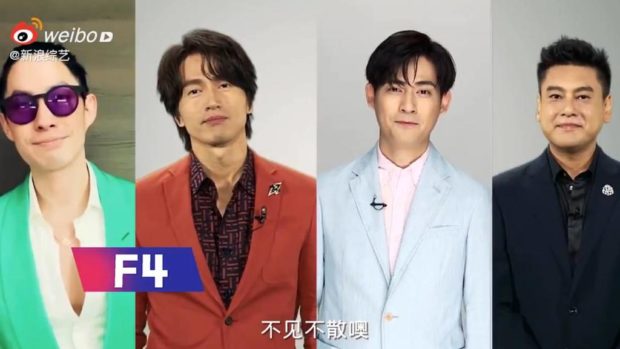 Taiwanese boy band F4 from the hit 2001 TV drama “Meteor Garden” will be reuniting to perform in a festival tomorrow, Oct. 30.

The event called “1,001 Night Festival” will be staged by Chinese channel Jiangsu TV at 8 p.m. The broadcasting group made the announcement on its Weibo account yesterday, Oct. 28, as per the fan blog Annyeong Oppa on the same day.

The company also posted a video of the group, which consists of Taiwanese actor-singers Jerry Yan, Vaness Wu, Ken Zhu and Vic Zhou. The short video featured the four men dressed in different colored suits, as seen in a post by a Facebook page dedicated to the TV show.

The company did not state where they would be streaming the event. This is not the first time Jiangsu TV has brought the four stars together. F4 previously performed in another event by Jiangsu TV back in 2013, as seen on its YouTube page.

The four actor-singers released their debut album “Meteor Rain” in August 2001, the same month the popular TV show ended. They dropped their third and final record called “Waiting for You” in 2007. Ryan Arcadio/JB