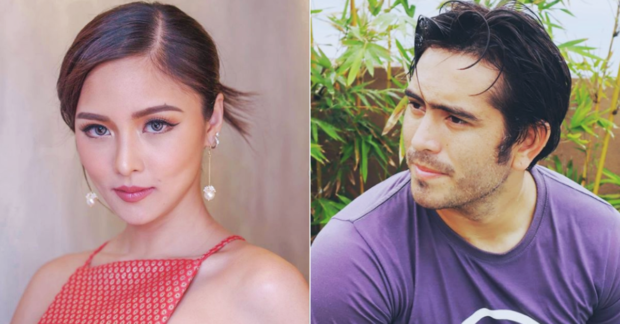 Kim Chiu had to face ex-boyfriend Gerald Anderson while on “It’s Showtime”—at least through Instagram.

The actress, who is also a mainstay on the noontime show, was made to like photos of Anderson as a “funishment” in the segment “Mas Testing.”

Chiu seemed to hesitate as she said, “Hindi ko nga pina-follow ‘yun, e (I don’t even follow him)!”

“Bakit n’yo naman isasali ‘tong taong ‘to? Nananahimik na kami, ah! Isang dekada na ang nakalipas (Why would you include this guy? We were already at peace! It has already been a decade)!”

She also addressed boyfriend Xian Lim, whom she said was watching the show, assuring him that “this is just a game.”

As she went through Anderson’s Instagram, she quipped, “Ta’s pagbukas mo rito, nandito si Julia Barretto (Then when you open it, Julia Barretto is here).”

A clip of her remark about Barretto was captured by Twitter user @BrightRaytz.

After her co-hosts reacted in shock, Chiu responded, “Ay bawal ba (Was I supposed to not say that)?”

After a while, she said, “Ay si Bea Alonzo pala (Oh, I meant Bea Alonzo).”

The “Love Thy Woman” star was in a relationship with Anderson, her longtime love team partner, before they broke up in 2010. After Chiu, Anderson wooed Alonzo in the same year, but their romance was brief.

It would take years before they would reunite as a couple. However, in 2019, Alonzo revealed that the “A Soldier’s Heart” star suddenly stopped talking to her.

Anderson’s “Between Maybes” co-star Julia Barretto was implicated in their split, though Barretto denied her involvement. Rumors still persist, however, that she and Anderson are an item. Niña V. Guno /ra

Read Next
Charo Santos-Concio looks back on wins, losses in life as she turns 65
EDITORS' PICK
Smart Prepaid encourages the youth to take their passions to the next level and ‘Live GIGA’
DOF to PITC: Return P1 billion in interest on ‘idle’ funds
Experience clearer calls nationwide with Smart VoLTE
Año to public, officials: Refrain from holding events
Arthaland’s property management arm utilizes Amazon Web Services to enhance delivery of service
Watershed degradation abetted flooding, says scientists’ group
MOST READ
April Boy Regino passes away at 59
Año: Gov’t to conduct fact-finding on mass gatherings attended by Roque, Pacquiao
‘What is mine is hers,’ says Matteo on sharing finances with his Popstar Royalty wife
’Blind obedience’: Robredo twits Briones for pleasing only Duterte, not teachers, students
Don't miss out on the latest news and information.