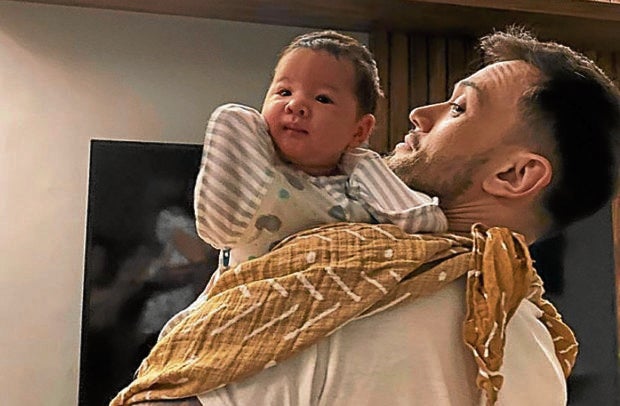 Going home after putting in a hard day’s work has never been more fulfilling for first-time father Billy Crawford.

“Even if I had just stepped on the set, all I could think of is seeing and being with my child later on, because I want to make him burp, hug him,” he said at a recent virtual press conference for the noontime variety program “Lunch Out Loud,” one of block-timer Brightlight Productions’ new offerings at TV5.

Aside from cohosting “LOL,” Billy is also the face of another TV5 program—the music game show “The Masked Singer,” which, on the other hand, is produced by Viva Entertainment. And while he expects to be busy in the coming weeks, Billy said he would have enough time for his son.

“The taping hours these days aren’t what they were before [the COVID-19 pandemic] happened. We have to abide by the new rules and regulations. We don’t go beyond our working hours, so I still have time for the kid,” he said.

The singer-television host admitted that he still feels a bit worried going out to work during these times. “But that’s just some of the sacrifices you have to make, so you can give your child, your family a good life,” he pointed out.

Billy has nothing but praise and loving words for Coleen, whom he described as “the strongest woman” he has “ever known.” “I’m in awe of her. Saludong-saludo ako … given all the sacrifices she makes. She’s breastfeeding every 30 minutes, every two hours,” he related.

Like Billy, Coleen is an ABS-CBN talent affected by the network’s nonrenewal of franchise. Will she follow Billy to TV5 in the future? That’s completely up to her, Billy said.

“What I like about us is we don’t meddle in each other’s work. But we do it for the same reasons. But for now, I’m thankful that she has, at least, some time to rest and focus on being a mom,” he said.

“I’m grateful to be part of this new family. This is a big blessing for all of us. When we have work, that’s our happiness,” said Billy.

Doing “LOL”—as with just about everything the past couple of months—entailed adjustments. “This is a season of change. And all of us who returned to work had to get used to the situation. But I’m thankful that, in this dark period, love and support came through,” he said.

Thankfully, the transition was made easier by the fact that a number of production people he’s working with now were from ABS-CBN, too. “Some of the staff members, cameramen, utility men, writers, etc. come from other networks,” he related.

“The cast, staff and everyone else involved in the show are collaborative. Anyone who has an idea that we think can help are lent an ear,” he added.

The year 2020 has been a humbling one for Billy. “What I learned is that, no matter where you are, you have to start again somewhere to reach your goal,” he pointed out. “And it’s great to see everyone lifting each other up.” INQ