Betong’s view from the top 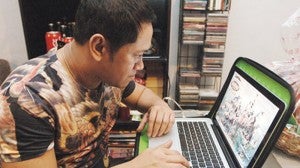 BETONG made an album of “Survivor” photos on his laptop for fellow castaways.

He carefully cultivated the image of unlikely hunk and resident gofer in the latest season of GMA 7’s “Survivor Philippines (Celebrity Doubles Showdown).”

Now, it’s time to shatter the “underdog” persona of comedian Albert “Betong” Sumaya, who won a cash prize of P3 million during the reality show’s finale.

He recalls: “[Fellow finalist] Mara [Yokohama] used to tease me: ‘You’re only pretending to be poor. How come you live in a condominium?’”

Betong, who works as staff producer in the Kapuso network, explains that he shares the condo with two other friends.

But there’s no mistaking it: The view from the terrace can make you feel like you’re on top of the world—or at least above Quezon City and its environs.

Even as things are looking up for Betong—who’s in the cast of two movies (“Boy Pick Up the Movie” and “Just One Summer”)—being down-to-earth is a trait he wants to keep.

His winnings from “Survivor” will surely allow him more luxuries, but he wants to prioritize his needs and rationalize his credit-card bills.

Most of his prized possessions are gifts from friends and fans, he points out.

When he fancies something he sees at the mall, he says, he tends to wait for it to go on sale.

His obsession for Coke souvenirs started early in life.

“My entire family loves the soft drink. Mealtimes aren’t complete without it,” he relates.

When he visited Tokyo to do research for a story on comfort women for his old show, “The Probe Team,” he chanced upon a vending machine.

“The Japanese Coke looked unusual,” he recalls. “So I smuggled a few in my luggage.”

That sparked his extensive collection, which now consists of items from countries as far as South Africa and the Czech Republic.

He has Coke cans from Germany, Korea and France and bottles from Saudi Arabia, Spain, Kosovo and Belgium. The 500 ml Coke bottle is from Tokyo, he says. The black can is from Prague.

He has Coke ref magnets and drinking glasses. Most of these are presents from “Survivor” partner and fellow comic Maey Bautista, who went globe-trotting as a staffer on the Kapuso magazine show, “Pinoy Meets World.”

Another childhood obsession is comic books. “When I was a kid, I hoarded Marvel and DC comic books,” he recounts. “I always watched weekend cartoon shows like ‘Saturday Fun Machine.’”

He owns a number of superhero action figures that he keeps in the family home. 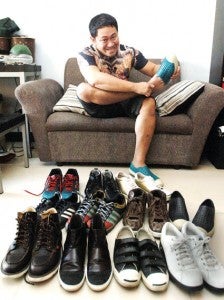 HIS SHOE collection can only be described as eclectic.

“Now that I’m an adult, I’m into Marvel clothes and accessories,” he confesses.

He owns superhero tees, caps and jackets. He has a Captain America bag that looks like the hero’s shield.

Naturally, he was first in line when “Marvel’s The Avengers” opened in local cinemas.

During the reality show’s taping in Palawan, he amassed a number of souvenirs.

He kept the buffs the contestants wore and the coconut cups they used.

He wanted to bring home the sooty pot they cooked their food in, but was afraid he would get in trouble at the airport.

“But I kept the pang-kayod (coconut meat shredder) and our small baul (chest),” he says.

He plans to have his tattered costumes framed.

“I was the first one to collect the items from the show, even the Tree Mail (scrolls for the challenges),” he remembers. “The others just followed suit.”

He also kept the table centerpiece from the show’s first press conference.

A fan from Cagayan de Oro gifted him with an intricate, indigenous jewelry that reads: “Survivor: Betong.”

As part of his comic persona on shows like “Unang Hirit,” “Ang Pinaka” and “Bubble Gang,” he has started accumulating all sorts of headgear.

“I wear them when I host corporate shows, too,” he says.

His favorite is a fedora. He usually gets his hats and caps from stores like Zara and Top Man. “It has to look one of a kind,” he notes. On a trip to Singapore, he snapped up hats with brand names like Unique and Pull & Bear.

For formal occasions, he matches conservative slacks with long-sleeved shirts.

But because he’s a comedian, he has to stack up on colorful outfits as well. “I have to look different on TV,” he says.

He can be a persistent shopper who’s not averse to hitting the stores in Divisoria and Makati.

But whether it’s a high-end boutique or a flea market, he waits for the items to go on sale. “I got some clothes at 50 percent off. Some at 30 percent off. I’d be happy with a 20 percent discount, too,” he quips.

He counsels other shopaholics to venture into out-of-the-way malls that are seldom frequented by crowds.

“A good place to hunt for discounts is Sta. Lucia mall in Cainta,” he says. “I also go to the Duty Free shop in Clark. There are a lot of good finds there.”

Apart from the usual Marvel jackets, he owns two that are emblazoned with his show’s logos.

The “Survivor” jacket was a gift from director Rico Gutierrez; the “Tamang Balita” jacket from cohost Sheena Halili, who had it specially made for the team.

He frequents various shops like People Are People and Folded & Hung.

He goes for extraordinary footwear. “I want to stand out,” he admits. “I prefer shoes that no one else would think of wearing.”

His shoe rack is bursting with colors.

“I buy mostly high-cut shoes—anything that looks vibrant and bizarre,” he says.

Fellow “Survivor” castaway KC Montero gifted him with a pair of Vans.

He puts on the Samuel and Kevin safari shoes, which he got at the 999 Mall in Divisoria, when he needs to portray a kooky character.

He bought the K-Swiss sneakers in Singapore and the New Balance pair at TriNoma, Quezon City. “The store manager was kind enough to give me a 20 percent discount on the New Balance shoes. I think he’s a fan of ‘Survivor.’”

His future is so dazzling, he needs shades.

Among the eyewear brands in his collection are Vans and Springfield.

His taste for shades veers toward the outrageous, too. But he insists that he wore the red-rimmed shades only when he played the character Super P on the show “Day Off.” “They cost only P100,” he notes. 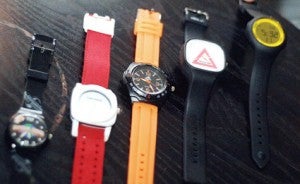 Some of the timepieces in his closet are presents from his and Maey’s fans from abroad.

His favorite is the Puma sports watch.

He never leaves home without his Bench watch. Other brands in his collection are Fossil, Converse, Aldo and American Boulevard.

Some of the bottles on his dresser are gifts from friends.

Among his faves are Burberry, Bulgari and Ogie Alcasid’s OPM and Dingdong Dantes’ Desired from Bench.

“I love Bulgari Aqua Tonic because it smells sweet and masculine at the same time,” he says.

When he’s scrimping, he turns to local brands. “Bench is affordable. I don’t have to worry even if I finish an entire bottle quickly. I can keep spraying—especially on hot summer days.”