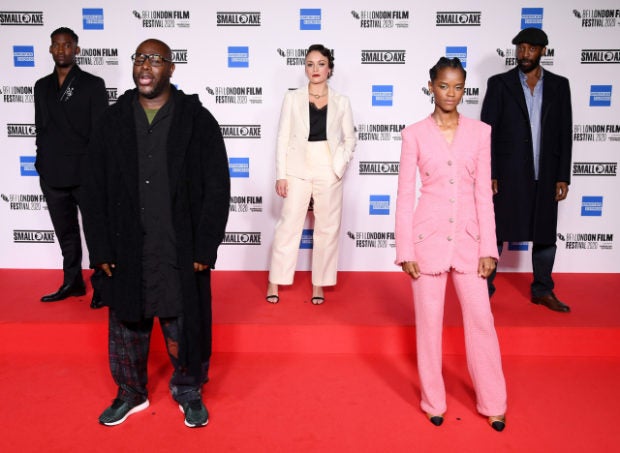 “Mangrove” is the first in McQueen’s five-film “Small Axe” anthology, focusing on the decades-long struggles of London’s West Indian community against racial injustice.

It chronicles nine black protest leaders battling police discrimination in the streets and courts in the 1960s and 1970s.

The eventual acquittal of the group, who became known as the Mangrove Nine, is seen as a key moment in British race relations but their story is not widely known.

McQueen — the first black director to win the best picture Academy Award in 2014 for “12 Years a Slave” — said making the anthology was “a celebration of all that that community has succeeded in achieving against the odds”.

“It is a love letter to black resilience, triumph, hope, music, joy and love as well as to friendship and family,” he said in a statement to open the festival.

“Although they are about the past, they are very much concerned with the present. A commentary on where we were, where we are and where we want to go.”

The London Film Festival is now in its 64th year but is taking place largely online over 12 days because of coronavirus restrictions.

It features films and documentaries from over 40 countries, closing with Francis Lee’s biopic of the 19th-century paleontologist Mary Anning, “Ammonite”, starring Kate Winslet and Saoirse Ronan.

‘We are the small axe’

McQueen’s “Small Axe” series, 11 years in the making and named after a West Indian proverb meaning “together we are strong”, will begin to air in November in Britain on the BBC and in the United States on Amazon Prime Video.

He said the five race-infused films, which include young love and coming-of-age stories, were all based on real events recounted to him by his parents and aunt.

But he noted they were also informed by his own experiences of racial discrimination growing up in Britain in the 1960s and 1970s, which persists today.

In 2017 the Windrush scandal caused uproar when it emerged a generation of Britons of Caribbean origin who moved to the U.K. legally in the 1950s and 1960s had been wrongly detained or deported for being illegal immigrants.

The films also arrive against the global backdrop of the Black Lives Matter protests sparked by the death in U.S. police custody of an unarmed black man, George Floyd.

McQueen dedicated two of the movies to Floyd and other black victims in the United States, Britain and elsewhere when they were selected earlier this year at the Cannes Film Festival.

“As the proverb goes, ‘if you are the big tree, we are the small axe’. Black Lives Matter,” he said.

“Mangrove” depicts how the West Indian community in London’s Notting Hill neighborhood faced years of unrelenting police harassment from racist officers, leading to a protest and clashes in 1970.

The subsequent trial of nine protest organizers, for rioting and affray, resulted in the first judicial acknowledgment that some police behavior was motivated by racism.

“What this trial has shown is that there is clearly evidence of racial hatred on both sides,” the judge is recounted as saying in the closing stages of the film.

Actress Letitia Wright, who plays a leader of the British Black Panther Movement, Altheia Jones-LeCointe, said she wished the “really important” story had been told to a mass audience sooner.

“We are educated on the African-American side. But many haven’t heard our side of things here in the U.K.,” she said on the trans-Atlantic struggle for racial equality.

Frank Crichlow, who owned the Mangrove restaurant which served as a lively community hub for activists, intellectuals and artists, was one of the nine and is a central character.

McQueen said he was eager to find “brilliant young black talent” in Britain to fill the roles, and cast the “mesmerizing” but lesser-known actor Shaun Parkes in the leading role — comparing him to “a young Al Pacino”.

“Shaun has this ability to carry the weight of the world, you just see it on his face. He’s like a silent movie star,” he added. NVG

Horrors of slavery at center of Janelle Monae’s ‘Antebellum’