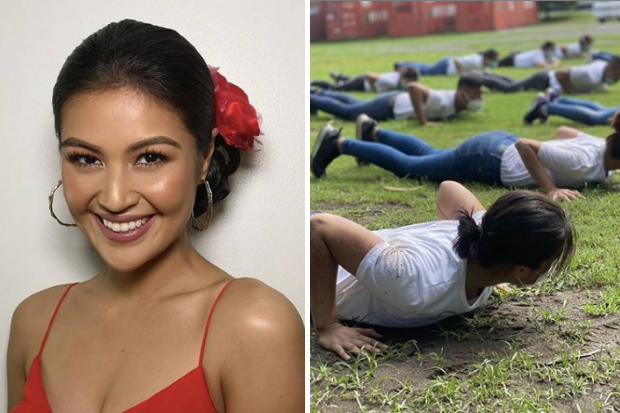 This beauty titlist is soon to become a reservist.

Driven by a desire to help others and prove that there’s more to her than just pageants and acting, Winwyn Marquez decided to undergo basic citizens’ military training under the Philippine Navy.

“I have always gravitated toward the path of service. I want to be able to protect not only my loved ones and fellowmen in times of emergencies. I would like to take part in civil and military operations, as well as humanitarian work,” she told the Inquirer in a virtual conference for “High Rise Lovers,” an upcoming instalment of the new GMA 7 drama anthology, “I Can See You,” which starts airing on Oct.12.

“These are the things that I have been learning and keeping me busy these past couple of weeks. And when I don’t have work, I still train every morning,” related Winwyn, who was crowned Reina Hispanoamericana in 2017.

The 28-year-old Kapuso actress is set to complete the military course and graduate in November. She couldn’t be more excited.“Being a beauty queen isn’t the only title I’m thinking of. Now I’m proud to say that this is another title for me—a reservist,” she said.

By sharing her journey with her followers, Winwyn aims to provide that extra nudge to those interested in joining the reserve forces. “It’s not about guns or being sent to war. It’s about helping people. And I hope I can inspire others,” Winwyn said. With her heart and mind-set on this new goal, entering a romantic relationship hasn’t really crossed Winwyn’s mind these days. “I’m happy being single; I’m OK alone. Meron naman diyan sa paligid-ligid, but it’s not a priority right now,” she said.

And besides, the current situation isn’t particularly conducive to dating or getting to know new people. “It’s difficult—I don’t want to do Zoom or online ligawan. No!” she said, laughing.

Winwyn previously dated Mark Herras, who’s now expecting his first kid with his current partner. “I’m happy for them… I would like to see and congratulate them,” she said.

In “High Rise Lovers,” Winwyn plays Ysabel, a potential third party to Samantha (Lovi Poe) and Luis (Tom Rodriguez), whose marriage has been deteriorating because of their conflicting life goals.

After moving into a new condominium unit, Samantha continues to strive for a career promotion. Meanwhile, Luis, who’s an unemployed contractor, is forced to accept a renovation job for Ysabel, another occupant. “My character is a free-spirited woman who’s focused on herself. She doesn’t want commitments, but still wants to find love deep inside,” Winwyn said, adding that shooting romantic scenes proved to be quite a challenge due to the safety protocols.

“You can’t be too close to each other … and since we can’t show intimate scenes, some of them we just have to leave to the people’s imagination.”

Winwyn admitted that she was nervous at first, because it has been seven months since her last show biz project. “I was afraid I had gotten rusty. I didn’t want to get scolded by the directors and producers, or cause delays, because things are difficult enough on the set,” she said.

While “High Rise Lovers” will only run for a week, Winwyn is still grateful for the opportunity. Doing short series, she pointed out, can also be a good way to get a feel of what it’s like to work in the “new normal.” “At least a lot of artists are being given the chance to work again… I think it’s also a way for us to see what can still be done to improve the production process, before we transition to a full-length series,” she said.

The quarantine can be maddening; taking a break from it all once in a while is important. For Winwyn, that means consuming Korean pop culture.

“Watching K-dramas, variety shows and listening to K-pop make me forget there’s a pandemic even for a while … it’s a big help,” said Winwyn, who also drew inspiration from the message of hope delivered by the popular boy band BTS at the recent United Nations General Assembly.

“As they said, ‘Life goes on,’” Winwyn related. “We have to find ways to make people around us happy.”