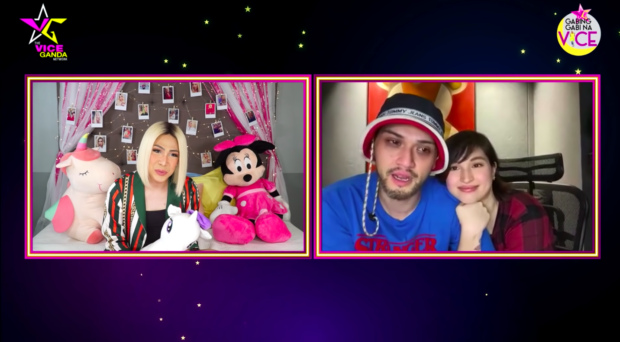 The comedian had Crawford and his wife, Coleen Garcia, on his talk show “Gabing Gabi na Vice” on Saturday, Sept. 26.

While their conversations were light, focusing more on the couple becoming new parents, toward the end of the show both Vice and Crawford became teary-eyed as they shared their love for each other.

Vice seemed to hint that Crawford was going to transfer to another station. It was confirmed on Tuesday, Sept. 29, that the singer and dancer would host “The Masked Singer” on TV5 starting this October.

“I love you at gagalingan mo sa mga gagawin mong trabaho at alam mo, sa pamilya, ‘di ba, sa pamilya meron kang kapatid na lilipat ng bahay (I love you, and do well in the work you will do and you know that with family, you will have a sibling who will move away),” said Vice to his former “It’s Showtime” colleague.

“Kaya kahit lumipat ka ng bahay, kahit saang bahay man tayo magpunta, magkakapamilya, family kita… at mahal na mahal kita (So, even if you move to wherever you go, we are family and I love you so much),” he stressed.

Prior to the sincere exchange, Crawford had already been crying as Vice praised him for the love he gave to the people around him.

(This guy looks like he’ll fool around, but he is kind. He is kind to the people he loves. What more can he do for his child, when with me, he is all out.)

Crawford returned the love stating, “I love you, Vice. Tatandaan mo ‘yan, wala akong pakialam kung anong sabihin ng kahit kanino, basta kayo, alam n’yo kung sino kayo, ipaglalaban ko kayo nang patayan, Vice (I love you, Vice. Remember that, I don’t care about what is said to anyone, but you know who you are, I will fight for you to the death, Vice).”

Vice told him to stay happy and at peace, and to focus on his family of three rather than others.

“I just wanna say thank you. Thank you sa pakikipagkaibigan mo sa akin (Thank you for your friendship),” Crawford said.

“Trust me, kahit anong mangyari, tatawagan pa rin kita at sasabihin ko, ‘Ikaw pa rin ang pinaka-
number one b*tch sa buong buhay’ (Trust me, whatever happens, I will call you and say, “You are the number one b*tch in life”)… I love you .” Niña V. Guno /ra

Billy Crawford to host local adaptation of ‘The Masked Singer’