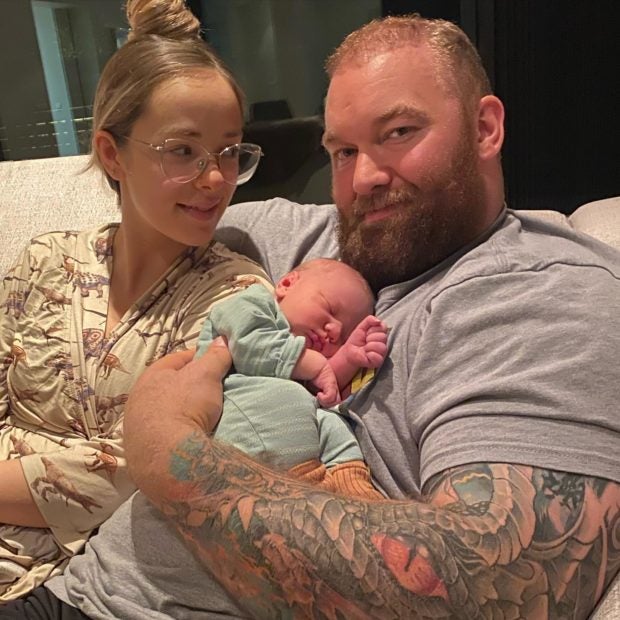 Hafþór Júlíus Björnsson, better known as The Mountain in “Game of Thrones”, has welcomed his first son with wife Kelsey Henson.

Henson gave birth to their baby boy on Sept. 26, as per the actor’s Instagram post yesterday, Sept. 28. The proud father also recalled the day of his son’s birth alongside photos of the two of them in sweet moments with Henson.

He explained that Henson woke him at 6 a.m. since she had been already losing water. As she continued to experience stronger contractions, their midwife advised them to go to a birthing center.

The couple arrived at the clinic before 9:00 a.m. and Henson immediately asked for the birthing pool. When she finally sat in the tub, she quickly began pushing.

“Things escalated super quickly. Throughout it all she did amazing,” Björnsson said. “She was in complete control of her mind and body.”

After “an extremely hard” two hours and 19 minutes, Henson had given birth to their “healthy, strong, beautiful boy.” He weighed 3530 grams and measured 52 centimeters long.

Following the delivery, Björnsson called his daughter Theresa Lif “to introduce her to her new little brother.”  He shares Theresa with his ex-girlfriend Thelma Björk Steimann.

Björnsson and Henson returned home at 5:30 p.m. He then assured his fans that the mother and child are “doing super well.” They have also decided on a name for their son but have yet to reveal it.

The couple first announced they were expecting a child last April, more than a year after they wed in Iceland in October 2018. Björnsson met Henson back in September 2017 at a bar in Alberta, Canada where she worked as a waitress. JB