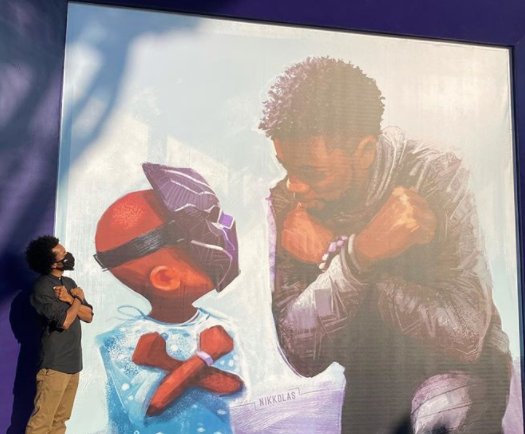 Disney has unveiled a mural honoring the late actor Chadwick Boseman, famously known as King T’Challa in Marvel’s “Black Panther,” a few weeks after he was laid to rest.

The new mural, aptly titled “King Chad,” was created by concept artist and former Disney Imagineer Nikkolas Smith. The installation can be found at Anaheim’s Downtown Disney in California, USA.

The artist took to Instagram yesterday, Sept. 24, to share his work, noting that “this one is special.”

“It is a full circle moment for me: my final two projects as a Disney Imagineer last summer were working on the Children’s Hospital project and the Avengers Campus,” Smith explained. “To millions of kids, T’Challa was a legend larger than life, and there was no one more worthy to fill those shoes than Chadwick Boseman.”

“I’m so thankful to be able to honor Chadwick’s life and purpose in this way. I am grateful to the Disney family for being so supportive of my journey as an artist,” he added.

Boseman passed away inside his home in Los Angeles on Aug. 28 after a four-year battle with cancer. Despite this, he was still able to star in several films such as the Marvel Cinematic Universe’s (MCU) “Black Panther,” “Captain America: Civil War,” “Avengers: Infinity War” and “Avengers: Endgame,” as well as in “Marshall” and “Da 5 Bloods,” along with other projects.

The late actor has also been commended by fellow artists and fans for taking the time to visit sick children in the past years while he himself was battling colon cancer, unbeknownst to the public.

Walt Disney Imagineering’s official Instagram account likewise shared Smith’s work, which has the inscription: “As a former Disney Imagineer, I had the honor of working on a major children’s hospital initiative and Avengers Campus as my final two assignments.”

“Seeing Chadwick’s heart for people in-person, and later discovering his courageous battle with cancer, I was inspired to create this tribute to honor his life and legacy. To us, he was and will always be T’Challa. Long Live The King,” the inscription further read.

Millions of fans around the world and stars alike have since shared their respective tributes to honor the late actor.

Other than portraying T’Challa a.k.a. Black Panther in the MCU, Boseman is known for giving life to Black icons Jackie Robinson and James Brown in the big screen.  /ra