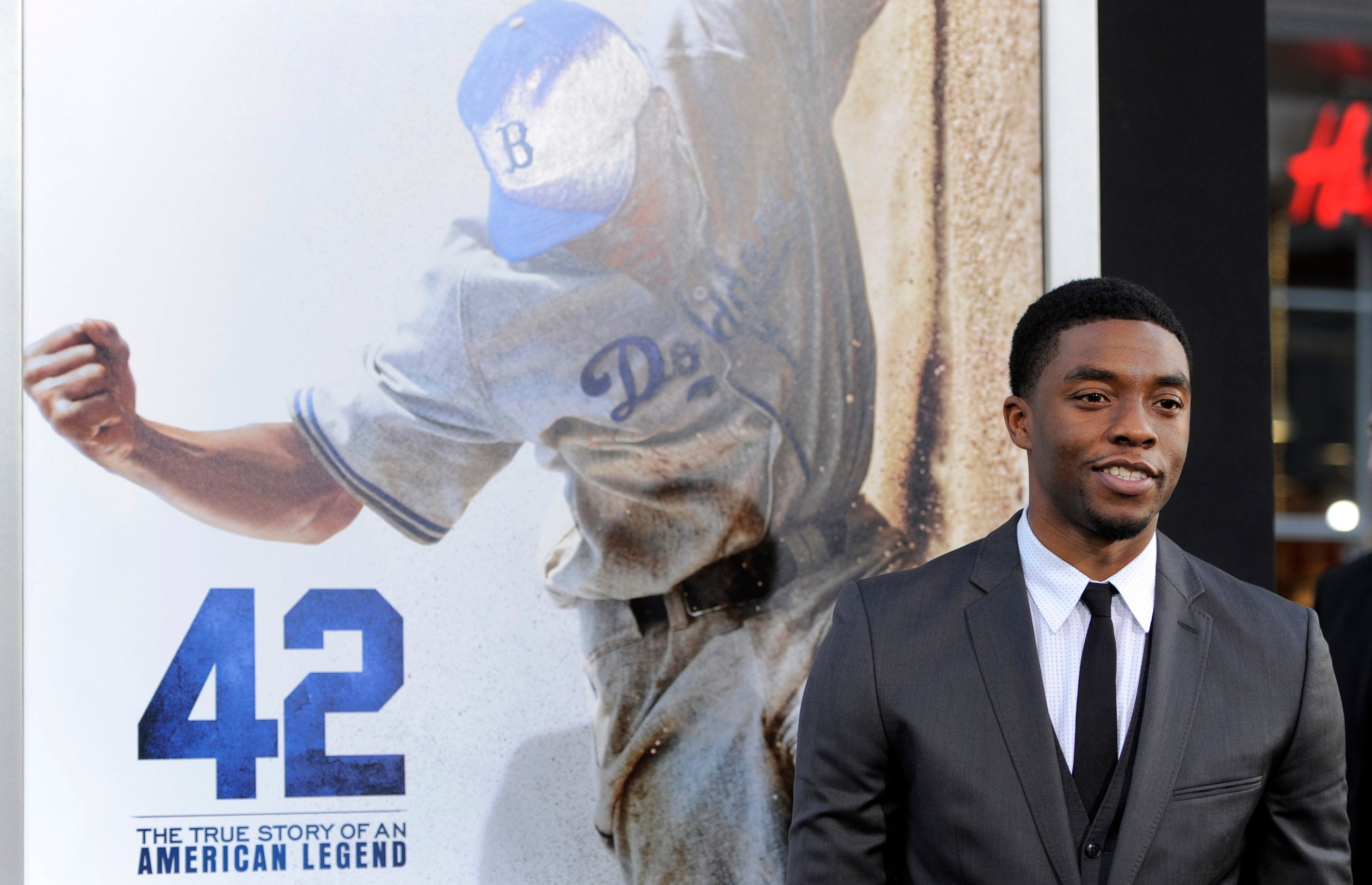 FILE – In this Tuesday, April 9, 2013 file photo, Chadwick Boseman, who plays baseball legend Jackie Robinson in “42,” poses at the Los Angeles premiere of the film at the TCL Chinese Theater in Los Angeles. Actor Chadwick Boseman, who played Black icons Jackie Robinson and James Brown before finding fame as the regal Black Panther in the Marvel cinematic universe, has died of cancer. His representative says Boseman died Friday, Aug. 28, 2020 in Los Angeles after a four-year battle with colon cancer. He was 43. (Photo by Chris Pizzello/Invision/AP, File)

NEW YORK  — “Chadwick came to the White House to work with kids when he was playing Jackie Robinson.

You could tell right away that he was blessed. To be young, gifted, and Black; to use that power to give them heroes to look up to; to do it all while in pain – what a use of his years.” — Former President Barack Obama tweeted Saturday.

“Chadwick was not only a deeply soulful and powerful actor, but he was such a kind, thoughtful, funny and gentle person. He brightened every ones day every time he walked into our hair and makeup trailer or on set with his beautiful smile.” — Scarlett Johansson, who co-starred with Boseman in three Marvel films, said in a statement.

“Mr. Boseman leveled the playing field while fighting for his life… That’s heroism. I’ll remember the good times, the laughter, and the way he changed the game.” — Robert Downey Jr., another Marvel films co-star, said in a tweet.

“There’s a reason (Chadwick Boseman) could play Jackie Robinson, Thurgood Marshall, and King T’Challa with such captivating depth and honesty. He, too, knew what it meant to truly persevere. He, too, knew that real strength starts inside.

And he, too, belongs right there with them as a hero—for Black kids and for all of our kids.” — Michelle Obama, former first lady, wrote in an Instagram post.

“To honor the life, contributions and memory of a truly extraordinary son of South Carolina @chadwickboseman – I have ordered the flags atop the Statehouse to be lowered to half-staff tomorrow, Sunday August 30, 2020, from sunrise to sunset.

The two flags will be removed at sunset and will be presented to Mr. Boseman’s family at the appropriate time.” — Henry McMaster, governor of South Carolina, said on Twitter.

“I want to dedicate this pole to Chadwick. What he accomplished and the legacy he left is so incredible to me. He’s inspired a whole generation of young black men and women and provided them with a true superhero to look up to. Rest in power my friend.#WakandaForever #blackpanther.” — Lewis Hamilton, Formula One world champion, wrote on Twitter referencing his latest win in Belgium on Saturday.

“I am devastated by the news of Chadwick’s passing. He was one of the great actors and men. He radiated warmth and wisdom: talent and deep kindness.” — Sienna Miller, who co-starred with Boseman in the film “21 Bridges.”

“A consummate professional, he absorbed every story, every memory and every photo and film excerpt he could consume to help translate the soul of an American hero. And now, Chadwick will be etched in history as a hero in his own right, especially have shown millions of Black and brown children the power of a superhero who looks like them. Chadwick — may you rest in peace eternally. Take your place among the greats. You earned it.” The Jackie Robinson Foundation said in a statement, noting Boseman worked closely with the baseball great’s widow Rachel for the film “42.”

“I’m heartbroken at the loss of #ChadwickBoseman. He was a tremendous actor who brought some of our community’s heroes to life. My prayers are w/ his family. His legacy will endure. Wakanda Forever!” — Maxine Waters, congresswoman from California, tweeted.

“An immense, stunning loss. @chadwickboseman was a Black icon, a star among stars who had so much more to give the world. It feels like just the other day I was next to him in Chicago. Now he’s gone, way too soon. Rest in power, King.” — Scottie Pippen, longtime Chicago Bulls star and six-time NBA champion, said on Twitter.