Chadwick Boseman didn’t just play icons. He was one. 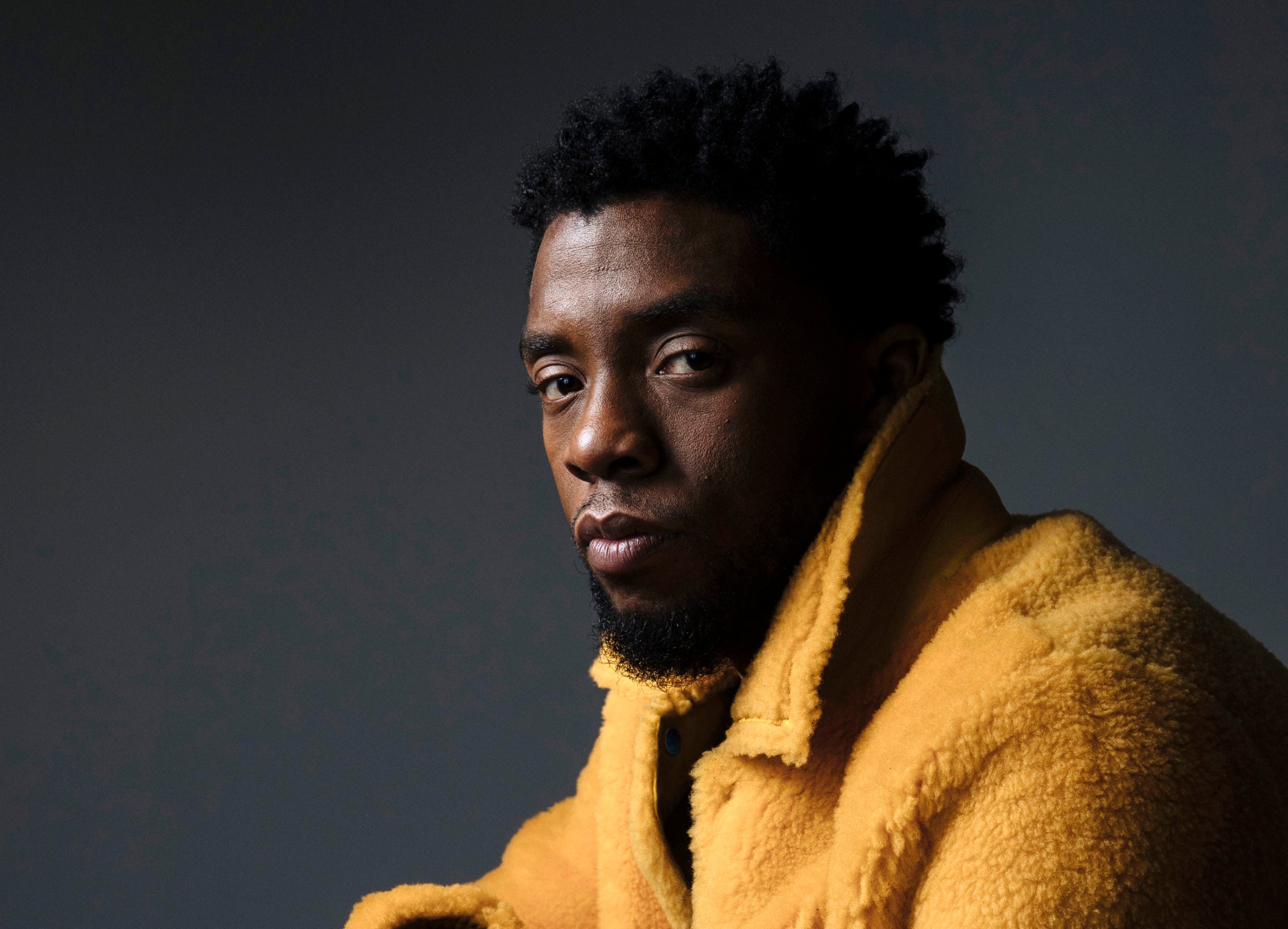 FILE – In this Feb. 14, 2018 photo, actor Chadwick Boseman poses for a portrait in New York to promote his film, “Black Panther.” Boseman, who played Black icons Jackie Robinson and James Brown before finding fame as the regal Black Panther in the Marvel cinematic universe, has died of cancer. His representative says Boseman died Friday, Aug. 28, 2020 in Los Angeles after a four-year battle with colon cancer. He was 43. (Photo by Victoria Will/Invision/AP, File)

The image that keeps replaying in my head since the death of Chadwick Boseman is from early 2018.

It was just days before “Black Panther” would open in theaters and the exhilaration aroused by this long-in-coming cultural event was everywhere around Boseman. Flocked by fans, he repeatedly paused for pictures until he was handed a months-old Black child whom he gently held, beaming.

Boseman’s family said that the actor, who died Friday at the age of 43, was first diagnosed with colon cancer in 2016.

Did he know when he held that baby that he might not live long enough to see a child of his own raised? Did he know that in playing Jackie Robinson, James Brown, Thurgood Marshall and T’Challa — in so gracefully filling the screen with the dignity of Black lives — that he was helping to cradle another generation?

In a tragically brief but historically sweeping life as an actor, Boseman played men of public life and private pain. Before Friday, we didn’t know he, too, was bearing such a burden. That has only magnified his accomplishment, bringing him closer to the great figures whose shoes he wore on film. 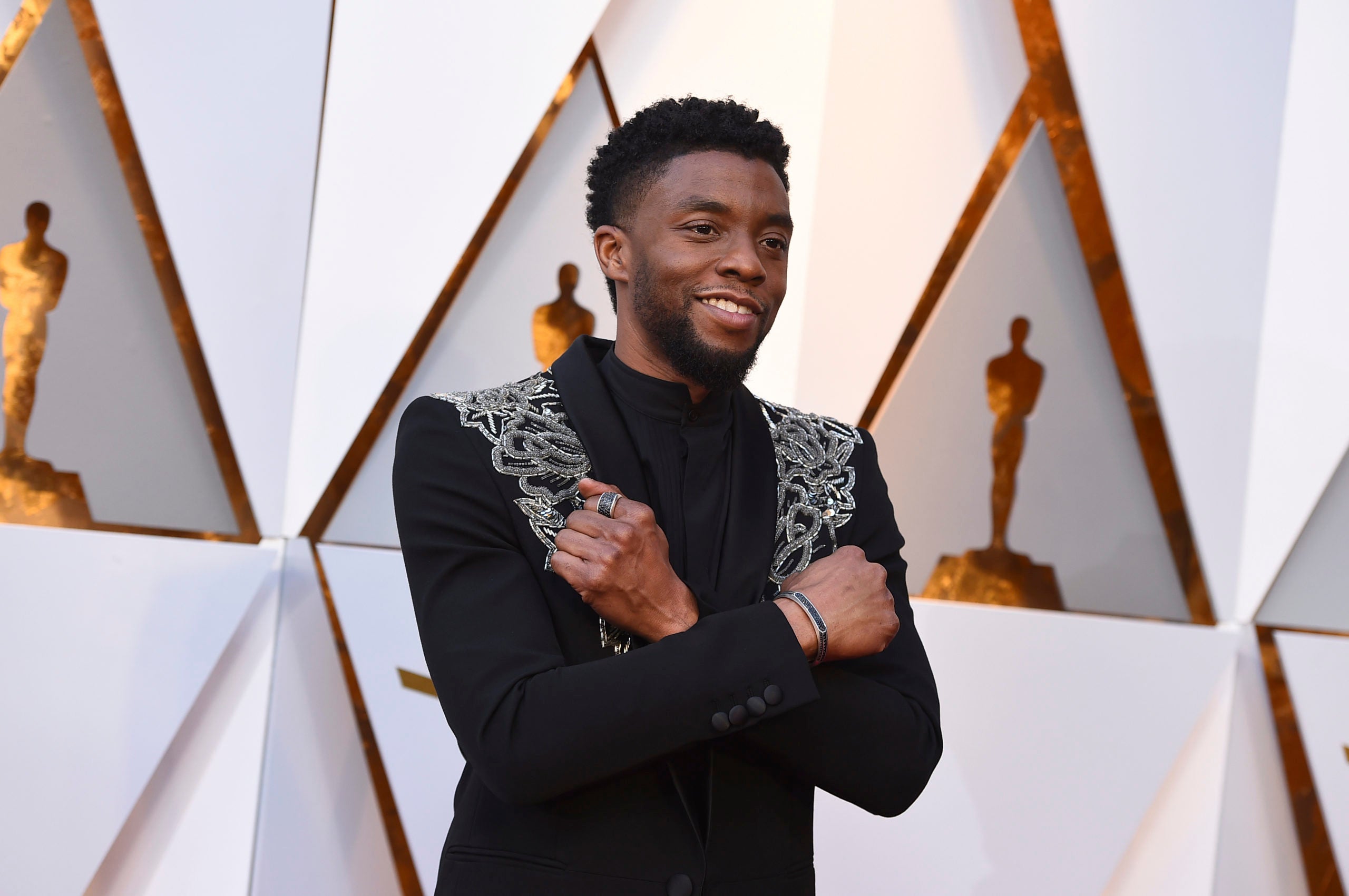 FILE – In this March 4, 2018 file photo, Chadwick Boseman arrives at the Oscars at the Dolby Theatre in Los Angeles. Actor Chadwick Boseman, who played Black icons Jackie Robinson and James Brown before finding fame as the regal Black Panther in the Marvel cinematic universe, has died of cancer. His representative says Boseman died Friday, Aug. 28, 2020 in Los Angeles after a four-year battle with colon cancer. He was 43. (Photo by Jordan Strauss/Invision/AP, File)

He played men who advanced a people’s progress, a trail he helped blaze himself. He played icons, and died one, too.

Boseman started out as a playwright. He was raised in the manufacturing town of Anderson, South Carolina, the youngest of three boys. As a junior in high school, he wrote and staged a play inspired by the shooting death of a basketball teammate.

Before he was a Hollywood star, he penned numerous hip-hop-infused plays: “Hieroglyphic Graffiti,” “Rhyme Deferred,” “Deep Azure” — and directed others. In New York, he performed with the National Shakespeare Company.

He compared his alma mater, Howard University, to his own personal Wakanda.

“If you have a blanketed idea of what it means to be of African descent and you go to Howard University, you’re meeting people from all over the diaspora — from the Caribbean, any country in Africa, in Europe,” Boseman said. “So you’re seeing people from all walks of life that look like you but they sound different.”

That early development of an expansive, historical understanding of African American identity surely fed the grace and humility of Boseman’s most famous roles. It wasn’t until he was in his mid-30s, after a handful of brief television appearances, that he landed his first leading role as Robinson in “42.”

He was, from the start, a self-evident movie star with a rare, effortless charisma. Rachel Robinson, the Hall of Famer’s widow, said it was like seeing her husband again.

In the hours of shock since the news of Boseman’s death, the story of how Denzel Washington paid for Boseman and other Howard students to attend a summer theater program at the University of Oxford has been much retold.

It’s especially fitting because it, as if by fate, links Boseman with Washington. Like his long-ago benefactor, Boseman exuded strength and self-possession.

When he played Robinson and Brown (in “Get on Up”) and Marshall (in “Marshall”), Boseman’s power wasn’t asked for or worked up to. It was innate. It was there already. “When I hit the stage, people better be ready,” he says in “Get on Up.” “Especially the white folk.”

Many would have, after playing Robinson and Brown, turned a blind eye to biopics. But by playing a young version of the Supreme Court justice in “Marshall” (which he co-produced) Boseman confirmed the ongoing nature of his project, one that would reach a staggering climax in “Black Panther.” Boseman first made his debut as King T’Challa in “Captain America: Civil War” in 2016, the same year he was diagnosed with colon cancer.

After playing a string of pioneers, Boseman led the “Black Panther” revolution.

It’s mind-boggling what Boseman was able to accomplish, facing down an industry’s historical prejudice while suffering through cancer treatments. But it’s equally hard to measure what lay in front of him. In less than a decade, Boseman changed the movies.

His more recent films suggest the next decade was going to be at least as interesting. In last year’s “21 Bridges,” a film he also produced, Boseman plays an NYPD detective whose cop-killer case uncovers the department’s own persistent corruption. Boseman’s very presence reorients the story.

During the filming of “Black Panther,” Boseman said he was communicating with two boys who had terminal cancer. They were hoping to make it long enough to see the film. “I realized they anticipated something great,” Boseman said in a SiriusXM interview.

The kids, Boseman said through tears, didn’t make it. But in his unjustly short career, Boseman held in his hands a world, illuminated on screen like never before.