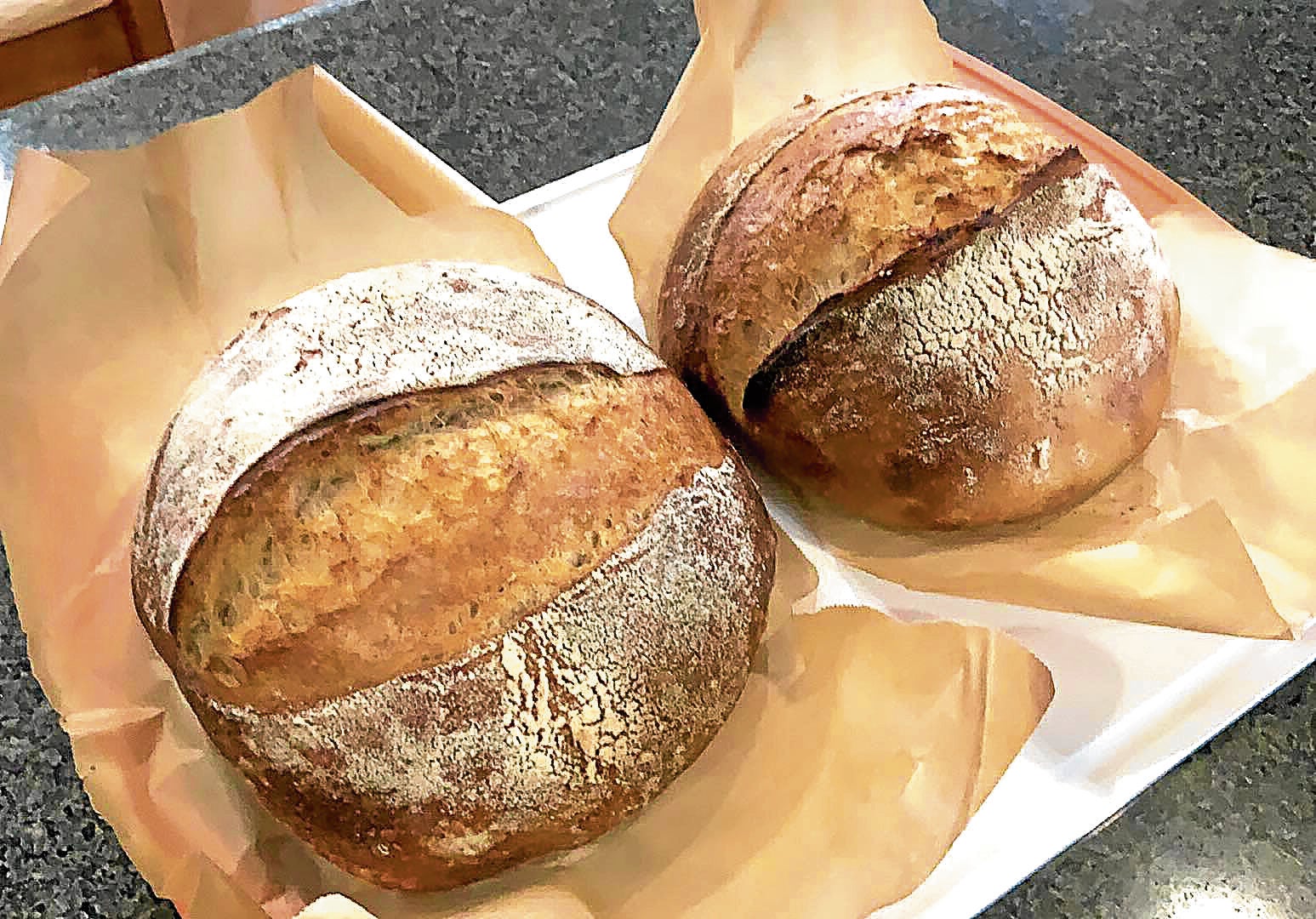 Since it seems I’m thoroughly enthralled, as well as entertained, by this hobby of mine called sourdough breadmaking, I may as well write about it.

This baking journey began with a challenge to make soufflés. After three tries, I was able to achieve consistency with each bake, recognize the difference between soft peaks and hard ones, and be truly excited by seeing a rise from the ramekins. I still bake them from time to time upon request. They’re light, airy and delicious, but not exactly waistline-friendly.

Next, I thought to give one beloved type of bread a go in the kitchen: Hokkaido milk bread. I found a couple of recipes online; the one found on YouTube is far more helpful as there are video demonstrations of every step in the process.

I’ve baked this a few times and, again, was able to get a consistent bake process. No issues, even with my faulty first loaf. It ended up still being a decent loaf of bread. I then graduated to baguettes as my daughter requested that I give those a try. My hands got used to kneading dough and figuring out what to look for as far as texture.

Then, I started thinking: What about sourdough?

The minute I hatched the thought, the research began. There are not just a few recipes available and they’re not all the same. So, a conversation began with friend, actor and fellow bread baker Joaquin Valdes who already had more than his share of baked loaves under his belt.

He allowed himself to be available for advice, and even shot videos of himself folding dough so I could learn. I shall always be grateful for his generosity, and as a gesture of recompense, I sent him a little bit of starter for his bakes while he’s here in Manila.

Speaking of starter … this wasn’t always the smoothest part of the relationship.

My first attempt at creating a sourdough starter was named Dierdre (no, there’s no particular reason, I just liked the name). It was ordinary all-purpose flour and water placed in a glass container with a cloth secured on the top to keep insects away. Dierdre stank up my kitchen after a few days. She was extremely temperamental. I ended up discarding the lot and started once again.

This time, with whole wheat flour and water, and taking care to make sure my measurements were correct, we began anew. This new starter had much potential. It smelled fragrant. Slightly tart like a nice tub of yogurt, but didn’t have a repellant quality to it. I shared the good news on Facebook, and my friends immediately gave suggestions for what to name it.

Joaquin himself provided it: Lazarus. Named for the one brought back from the dead. Yeah, totally appropriate. And Lazarus has turned the top of my fridge into a magic fermentation station. (I’ve also begun to make sauerkraut, and the results are also magical.)

Now that I had a healthy starter, it was time to figure out the bread itself. I found out about levains (or leavens), making an autolyse, bulk fermentation, oven spring and a retard. My head started spinning! Dude, I just want to bake a nice loaf of bread.

After a few deep breaths, I found a recipe. However, that first loaf wasn’t right. There was virtually zero oven spring (that nice rise when the dough is placed in a hot oven) and the crumb was too dense. The second attempt, using a different recipe, turned out better, but still not quite right. For loaf No. 3, I went to Full Proof Baking on Instagram, which then led me to its corresponding YouTube channel.

I took lots of notes on what percentage of everything she used and followed all her instructions to the letter. That next bake was better, and I started to get to know my dough better. I began to recognize the signs for if I needed to do another stretch and fold (should I leave it at three or do I need to do another one?), loved the sight of the fermented dough creeping from the folding vessel onto my kitchen counter for shaping, and knew when to leave well enough alone once the finished dough was in a proofing basket.

I’ve learned to do some of the steps using my senses rather than a written recipe. My dough and I are now intimately acquainted with one another.

So now, I bake every other day, and it brings me immense joy. My kitchen smells like heaven every couple of days, and my daughter enjoys the fruits of my labor. She asks for a slice or two every day to go with her meal, and it makes me very proud that I can do this for her.

A word of warning: like most hobbies we get ourselves into, sourdough baking is not for everyone. There is some measure of frustration and your patience can and will be tested.

However, like many others who have embarked on this journey at whatever stage of this pandemic, I’ve now gone over that hump and have a smile on my face. At this very strange time, my one objective every day is thus: find that which sparks joy, whatever that may be.

Thankfully, there is plenty of joy in my life.